Members of the Vintage Racing Club of BC (VRCBC) recently a private tour of RWM & Co.’s restoration shop in Delta to learn more about the restoration process and view some of the 12 classics being worked on. 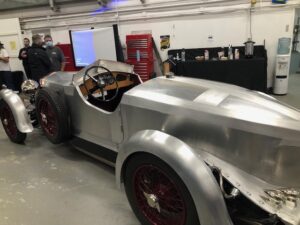 The tour began with host Rob Maynard speaking about the feature display, a Rolls Royce boat tail commissioned by a customer in Chicago. This stunning bit of workmanship with its all-aluminum body began several years ago as a Brooklands-style speedster bodied on the original Bentley chassis.

The current owner saw the working-in-progress Bentley at the Vancouver All British Field Meet (ABFM) show and requested RWM to convert it to a Rolls Royce special speedster. This was not an uncommon request back in the day when Rolls Royce and Bentley often provided chassis to independent coachbuilders, which were then bodied to the customers’ preference.

Alfa under restoration, primed for paint job in one of RWM’s three paint shop areas.

Maynard then led the large group of 31 enthusiasts through to the machine shop where equipment ranged from milling machines, metal lathes, distributor test machines and valve spring tension test devise. Work was underway on twin-cam engines belonging to a Datsun 240Z and an Alfa.

The next stop was to look at a pending project, an unrestored early 50’s Jaguar XK 120. This car was from North Vancouver and was rust-free. Our host described it as “one of the most original, rust-free Jaguars he has ever seen.” 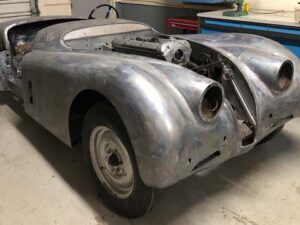 One of the most original Jaguar XK120’s that Maynard has ever worked on. The body has no rust and requires only paint.

Volvo P1800s are rapidly increasing in popularity and value. This one is owned by a 20-year-old RWM staff member.

1965 Volvo 1800S that was the sole project of one of the company’s 20-year-old apprentices. Very nice work to deal with the typical rust areas that these cars develop.

Through the maze of “clean” areas, we were led to a primer shop where an early English Ford Thames was undergoing a rebirth. Maynard shared that the owner brought the roof section to see if it could be repaired. It appears that rust had eaten the rain gutters off the roof, and it had fallen into the interior space. The RWM team completely rebuilt and replaced the roof with new hand-formed gutters, finishing the entire body in primer paint. 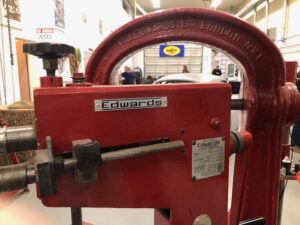 Next to the primer prep room is one of two paint booths. Inside was a ready- for- paint Dodge Demon, with its interior, trunk and engine bay painted in final bright red. The next stage is the final panel assembly and painting. Paint booth number two contained an Alfa Romeo body shell primed and awaiting a final paint job.

Outside the paint booths was an early fastback Mustang that will become a vintage racer and alongside was a Ferrari 250GT, suspended on a rotisserie.

RWM is a very impressive restoration shop with all the right tooling to help perform amazing workmanship. Rob and his wife Jaclyn work with a staff of 14 skilled tradespersons and apprentices.

Maynard, who was the 2019 recipient of the prestigious Vancouver ABFM Lewie Award for outstanding service to the automotive industry, clearly has a craftsman eye for quality work and he is very skilled in working with hand-forming metals to create beautiful replacement panels and vintage works of art.

The auto industry needs more skilled craftsmen to work on the increasing demand for collector car restorations and RWM is a wonderful example of a small shop that has grown rapidly over the past five years. With space to expand, RWM is actively looking to train more young apprentices who have a passion for the restoration process. Interested parties should contact Jaclyn Maynard at 778 683 7554.