By westernadmin on October 1, 2021 in Aston Martin, BMW, Petersen Museum 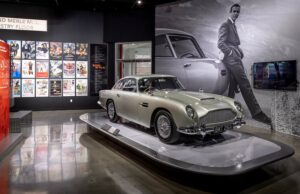 The exhibit, which will run through October 30, 2022, is the largest official Bond vehicle display to date in the U.S., featuring more than 30 cars, motorcycles, boats, submarines, helicopters and even scale filming models of aircraft from an array of both classic and contemporary Bond films.

The 25th film in the James Bond Franchise, “No Time to Die,” will be released in cinemas on September 30, 2021 in the U.K. through Universal Pictures International and in the U.S. and Canada on October 8, 2021, from Metro Goldwyn Mayer (MGM) via its United Artists Releasing banner.

“The vehicles that James Bond drives are a prominent part of the franchise’s legacy,” said Petersen Automotive Museum executive director Terry Karges. “The Petersen is excited to welcome all Bond fans, movie buffs and car enthusiasts to see many of these world-famous vehicles up-close in an intimate, yet exhilarating setting.”

Select other vehicles featured in the exhibit include:

For more information about the Petersen Automotive Museum, visit www.Petersen.org.