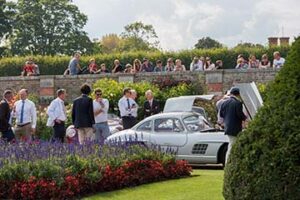 The leader of the of the U.K.’s Historic and Classic Vehicles Alliance (HCVA) is urging the industry and enthusiasts around the world to embrace the challenge of the green agenda.

The ‘not for profit’ alliance was launched in May 2021, with a mission to protect and promote the sector and secure its long-term future. It campaigns on behalf of individuals and companies in the classic vehicle world including specialist restorers, dealers, parts suppliers and a broad cross section of the industry.

“I think we need to embrace the environmental challenge and work with legislators to identify solutions—while at the same time demonstrating very clearly the environmental credentials of the classic movement,” said Garry Wilson, the HCVA’s first CEO.

Electric conversion of classics is in its infancy, but it is growing. The annual SEMA show in Las Vegas is where makers of aftermarket, restoration, and hot-rod components come to show off their latest products. Joining them in 2021 will be an increasing number of electric-conversion suppliers, and sprinkled through the halls will be a significant number of all-electric show cars.

“I’m a firm believer in two-way electrification—when you take out an engine and a fuel tank from one of the UK’s heritage vehicles and replace it with an electric power system you should do it in a way that allows an owner to reverse the process later if they need to,” said Wilson. “It shouldn’t be one way only.”

Despite all of this, many mechanics and car enthusiasts are still strongly against the idea of converting their beloved classic cars to electric vehicles. The value of a vintage car often ties into it remaining unmodified, and so it can be risky to dramatically change it by adding a new electric engine.

Converting a classic car to electric is currently incredibly expensive, making it unlikely that electric classic cars will become commonplace in the near term.