By westernadmin on September 29, 2021 in Auctions, Barrett-Jackson, Porsche 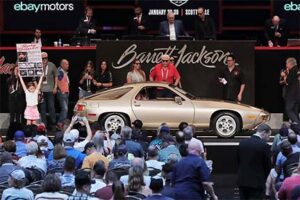 The highlight of Barrett-Jackson’s Inaugural Houston Auction, held on Sept. 18, 2021, was undoubtedly the record-breaking sale of the 1979 Porsche 928 driven by Tom Cruise in the film “Risky Business.”

Breaking world records for the sale of any Porsche 928 from any year, this piece of automotive and pop culture history sold for US$1.98M.

The hero car from the film, this vehicle was most notably featured in the film’s signature chase scene that culminated in Cruise, looking straight into the camera, declaring the German carmaker’s slogan, “Porsche. There is no substitute.”

To view the historic moment when this car was sold at the auction, click here.