By westernadmin on June 3, 2016 in Collector Hobby 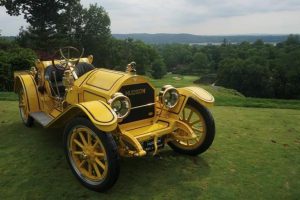 2016 marks the 120th anniversary of the automobile industry in America.  To commemorate one of the era’s defining events, the Historic Vehicle Asssociation (HVA) took a look back at the first comprehensive automobile contest held May 30, 1896.

As with many early automotive events, the May 1896 contest was sponsored by Cosmopolitan magazine. At the time, Cosmopolitan served as a general interest magazine, covering travel, literature, science and emerging cultural trends.  Of these, perhaps the most important trend of the day was the emergence of the horseless carriage as a new form of transportation.

Unlike the first official automotive race held in Chicago the previous November, the Cosmopolitan contest was to be more than a race of speed. Rather it served as an assessment of the “best horseless carriage” currently on the market. Each vehicle was judged on its speed, durability, simplicity of design and price by a distinguished team of experts.

Beginning at City Hall Park in Manhattan, the contest saw participants driving to the newly-opened Ardsley Country Club near Dobbs Ferry for the grand opening of its golf course. After driving straight down the course’s fairway, the route had participants making their way back to Manhattan.

Though 26 entries were submitted, only nine horseless carriages ultimately participated. Of these, the Duryea Motor Wagon, makers of the first American production car, proved the most impressive, taking home the $3,000 prize.

In commemoration of this historic event, the HVA returned to Manhattan and the Ardsley Country Club to mark the 120th anniversary of the Cosmopolitan contest.  In place of a Duryea, the HVA brought out a 1912 Hudson Mile-a-Minute Speedster to survey the old route up Broadway from Manhattan to the country club some 15 miles north of the city.

On Memorial Day (May 30, 2016), members and management of the Ardsley Country Club gathered to pay homage to the date 120 years ago when their golf course opened for the first time to automobiles, which, upon their arrival on the lawn, were judged as America’s best.

Currently, the HVA is exploring potential interest in a revival run in 2017 for the 121st anniversary of the event and the birth of the automotive industry in America