By westernadmin on June 14, 2016 in Infiniti, Motorsport, Racing 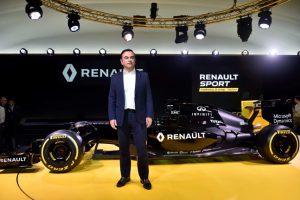 Starting with the new 2016 season, Infiniti will be a technical partner of the new Renault Sport Formula One team.

More than 100 engineering students attended an event at McGill University to learn just what it takes to compete in the 2016 Infiniti Engineering Academy.

For the first time in the program’s three years, Canadian students have the chance to compete to earn the career opportunity of a lifetime in Formula One and automotive engineering, with a factory F1 team and Infiniti.

Those who attended the event at McGill on June 10, 2016, had the opportunity to speak with and learn from Daniel Sanham, the 2015 UK winner of the Infiniti Engineering Academy; Tommaso Volpe, Global Motorsport Director, Infiniti Motor Company; and Frédéric Vasseur, Racing Director, Renault Sport Formula One™ Team. These three representatives hosted the event and provided the students with information on how they can jumpstart their careers in Formula One and automotive engineering.

With the support of Infiniti Canada, the Infiniti Engineering Academy has opened its doors to Canadian students this year and is challenging them to demonstrate their ‘Inspired Performance’ and earn the ultimate placement with Infiniti and the Renault Sport Formula One™ Team.

With a national final in Montreal this summer, one engineering student from Canada will be chosen to participate in an integrated training and mentoring program with world-leading engineers.

“We are looking for candidates that dare to be different, offering a mix of academic and professional experience across a variety of technical disciplines,” explained Frédéric Vasseur, Racing Director, Renault Sport Formula One™ Team. “The Infiniti Engineering Academy is packed with opportunities for these students to excel and the Renault Sport Formula One Team is excited to be a part of that journey.”

The automotive and Formula One industries have never been more competitive and in order to develop and flourish in this area, Infiniti is looking for the elite in engineering undergraduate talent. This year, Infiniti will choose one winner from each of the Regional Finals including: China, Europe (including Russia), United Arab Emirates, Asia and Oceania (including Singapore, South Korea, Australia and Hong Kong), Mexico, Canada and the United States.

“Infiniti believes that every technical innovation is driven by forward-thinking and creative human talent,” says Tommaso Volpe, Global Motorsport Director, Infiniti Motor Company. “The Infiniti Engineering Academy was established to recruit this talent and by doing so, Infiniti will be able to continue offering the very latest technologies to its clients.”

Having launched the careers of previous winners, including Daniel Sanham, 2015 UK winner, the Infiniti Engineering Academy is a great way for up-and-coming engineers to experience the fundamentals of automotive and motorsport engineering. Winners will have the opportunity to work on a number of projects, from design through to implementation, and play an integral part in creating new technological innovations.