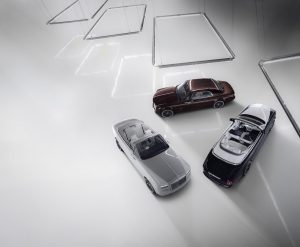 All 50 examples of Rolls-Royce’s Bespoke Team’s Phantom Zenith Collection have been commissioned by customers.

From its foundation 112 years ago, the story of Rolls-Royce Motor Cars has been defined by a commitment to setting and raising the standard by which all other luxury goods are judged.

On January 1 2003, this philosophy was realised emphatically with the handover of the first seventh generation Phantom to its customer at the newly established Home of Rolls-Royce in Goodwood, England.

Phantom Coupé followed in 2008, taking its place as one of the rarest and most celebrated Continental Grand Tourers of all time – paving the way for its natural heir: Wraith which cemented itself as the ultimate gentleman’s gran turismo in 2013.

The marque stands on the cusp of a bold new era, following the announcement of the eighth generation Phantom limousine and its all-new aluminium architecture that will underpin all future Rolls-Royce motor cars.

Phantom Drophead Coupé and Phantom Coupé will now leave the stage, a moment that will be marked with a Bespoke Phantom Zenith Collection conceived to set the highest standard by which everything is judged.

The Phantom Zenith Collection – representing some of the very last Phantom Drophead Coupé and Phantom Coupé motor cars ever to be built, will serve as true collectors’ pieces. All 50 examples have already been commissioned by customers who will add them to some of the world’s most significant luxury collections.

In styling the exterior and interior colour and materials palette, designers drew from Rolls-Royce history to create schemes inspired by some of the most celebrated Phantoms in Rolls-Royce history. The subtle contrast presented in the Madeira Red and Jubilee Silver Phantom Coupé, for example, is inspired by a 1930s Phantom II. A bolder, more defined contrast can be seen in timeless yet highly contemporary presentation of Midnight Blue and Artic White that echoes the genteel ambiance of a very special 1930s Rolls-Royce Phantom II Continental, whilst a new glass clearcoat has been engineered to enhance Phantom’s mirror-like shine.

These extraordinary motor cars, among the last ever Phantom Drophead Coupé and Phantom Coupés, are currently being crafted at the Home of Rolls-Royce.