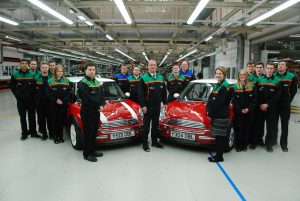 The first new MINIs, which were registered with ‘Y’ prefixed number plates, are now considered by many enthusiasts and fans of the brand to be modern classics.

The BMW Group, which is marking its centenary year in 2016, acquired the plant in 1994 and relaunched the brand in 2001 with the debut of the new MINI Hatch.

Since then more than 2.5-million MINIs have been produced in Oxford, with the three-million milestone expected to be hit later in 2016. Eighty per cent of the cars made in Oxford are exported to more than 110 countries around the world.

The 2001 MINI launch was the reinvention of a British motoring icon, which generated headlines around the world. As well as making the news, the car was subsequently recognised with several industry awards after it went on sale. This included being voted ‘Car of the Year’ in 2001 by leading UK weekly car magazine, Auto Express. Impressed by the car’s driving abilities, quality levels and safety features, the magazine praised the fact that the classic Mini’s DNA was “unmistakable” in the new car.

Sales of MINI, both in the UK and internationally, have gone from strength to strength over the last 15 years. In its first year, nearly 40,000 MINIs were sold worldwide. By 2015, this number had risen to nearly 340,000, with more than 63,000 sold to customers in the UK—the highest since the brand’s relaunch.

“MINI is an iconic British brand that has made a remarkable journey over the past 15 years,” said  Frank Bachmann, managing director of MINI Plant Oxford. “In that time we’ve more than doubled our capacity and gone from producing just one model to an entire range of MINIs that have proved hugely popular with customers around the world. Making 1,000 high-quality cars to individual order each day is a huge challenge but we succeed in doing so because of the passion and expertise of our workforce. Today [April 26, 2016], we celebrate what’s been achieved so far and look forward to an even brighter future here in Oxford—the heart of MINI production.

The plant’s automotive history dates back to 1913 when the great designer, entrepreneur and philanthropist William Morris (later Lord Nuffield), produced its first car, a “Bullnose” Morris, near today’s present state-of-the-art MINI production facility. The classic Mini was produced at Oxford from 1959 until 1968 with a peak output of 94,889 cars during 1966/67.

Today, more than 4,500 people are employed at the site in Cowley, which manufactures around 1,000 cars a day, including three and five door MINIs, the MINI Clubman and its first all-wheel drive All4 model—and the high-performance MINI John Cooper Works.

Three UK plants have had a part to play in MINI production: Hams Hall near Birmingham makes engines; Swindon produces body pressings and sub-assemblies for MINI; and this all comes together at Oxford with body shell production, paint and final assembly. Together, these plants have helped to generate and sustain employment for thousands of people directly and indirectly though the wider supply chain and retailers.

Between 2012 and 2015 BMW Group invested £750-million at the plants, taking investment in UK production to £1.75-billion since 2000. At Oxford this has included a state-of-the-art paintshop, a high-technology body building facility, a new final assembly area, a new logistics centre, Quality and Engineering Centre and the MINIcademy, where the plant’s apprentices are trained.

The first MINIs, which were registered with ‘Y’ prefixed number plates, are now considered by many enthusiasts and fans of the brand to be modern classics.