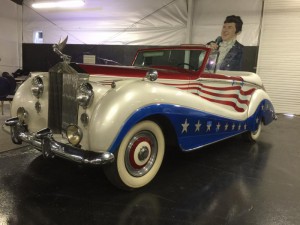 Designed for the Liberace Show ’76, the majestic vehicle was used on stage at the Las Vegas Hilton, with Liberace flying out of it via high wire cables while fireworks exploded and Stars and Stripes Forever played.

The vehicle was later used at Radio City Music Hall in New York City for the 100th anniversary of the Statue of Liberty.

In addition to the 1952 Silver Dawn other vehicles on display at the Liberace Garage is a 1961 Rolls Royce Phantom V that Liberace used to drive onto the stage when he performed at the Las Vegas Hilton. The vehicle was used in the production of the Emmy and Golden Globe Award-winning HBO film Behind the Candelabra, starring Michael Douglas and Matt Damon; Douglas, as Liberace, drove it on the stage.

The Liberace Garage also includes the crystal-encrusted roadster that Liberace had onstage during his final run of shows at Radio City Music Hall in 1986, and a large handful of cars he drove regularly, including the London Taxi (with its meter still installed) that he used to pick up famous guests from the Palm Springs Airport and the Bradley GT gold-flaked sports car, among others.

The Hollywood Cars Museum at Hot Rod City is presented by Michael Dezer, owner of one of the world’s largest vehicle collections at the Miami Auto Museum. It features vehicles that have appeared in more than 100 films, TV shows and videos and many wild custom creations.