By westernadmin on April 15, 2016 in Motorsport, Racing

The 24 Hours of Le Mans, held at the Circuit de la Sarthe, Le Mans, France (June 15-19, 2016), is the world’s oldest and greatest endurance race, representing the pinnacle of passion, prestige and precision.

At its inception in 1923, the 24 Hours of Le Mans was suitably called the “Grand Prix of Speed and Endurance”. Since then, this gruelling race, combining public roads with race track, has called on drivers to continuously reinvent perfection as they prepare and compete, blending performance and durability over 24 hours of racing and more than 5,000 kilometres.

Over the years, the race cars have evolved into prototypes and road GTs, with new hybrid technology integration and competition modifications. The purpose, however, remains the same: to travel the furthest in 24 hours. This means the cars’ speed and reliability is tested to the extreme, while the drivers and teams are pushed up to and beyond their limits.

Offering an exciting combination of heritage, endurance and speed, the 24 Hours of Le Mans attracts more than 250,000 impassioned motor sport spectators, history buffs and thrill-seekers from around the globe, all eager to experience the festival-like atmosphere and the scintillating track action.

Throughout its history, Le Mans has witnessed many great battles: split second finishes, dramatic mechanical failures and race-changing weather. Preparation for all eventualities is fundamental, experience to make the correct split second decision, invaluable; a race against time on this scale requires the teams and drivers to function like clockwork. 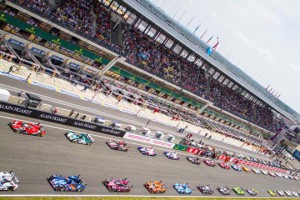 When this year’s countdown starts at 3pm on Saturday June 18, the drivers and teams will begin their quest to take the chequered flag on Sunday June 19 at 3pm and to win the most coveted award in motor sport, the Rolex Oyster Perpetual Cosmograph Daytona watch.

Rolex’s close ties with motor sport reach back to Sir Malcolm Campbell’s World Land Speed Record successes in the 1930s, when he became the first driver to break the 300-mph barrier, at Bonneville Salt Flats. Since then, Rolex has partnered with iconic classic events steeped in tradition, such as the Monterey Motorsports Reunion and the Goodwood Revival; the leading motor sport series, Formula 1; and renowned endurance races such as the 24 Hours of Le Mans and the Rolex 24 At Daytona. More recently the Swiss watchmaker has increased its presence in endurance racing, becoming the Official Timepiece of the World Endurance Championship.

“The challenge of Le Mans is unique,” said nine-time 24 Hours of Le Mans winner, Tom Kristensen. “The first Le Mans race in 1923 was raced entirely on public roads; today’s race is still on public roads with more or less the same demanding layout: you cover 13.629 kilometres every lap, travelling at high speeds throughout the day and night. That, combined with the race’s rich history, makes it one of the ultimate events on the motor sport calendar.

“The race demands a cocktail of determination, grit and team spirit. In a way, it is quite simple – you just have to drive the furthest in 24 hours, but if you appreciate the distance you cover, how many situations, overtakes, breaking points and intense moments you experience, you realize how many stories both the drivers and cars have to tell when they cross that finish line. There is no question that the race winners earn their Rolex watch out there,” said Kristensen.