By westernadmin on February 15, 2016 in Volkswagen 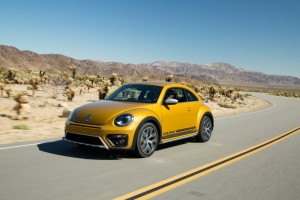 The 2016 Beetle Dune coupe will arrive this spring and has made its debut at this year’s Canadian International Autoshow in Toronto.

Inspired by the classic Baja Bugs of the sixties and seventies, the Beetle Dune has a new look thanks to the fitment of new front and rear fascias and pronounced black wheelarch extensions that flow into the bumpers.

Additionally, the Dune comes with 10 mm increase in ride height and a body track that is 14 mm wider.

Highlighting the front end’s new look is a bumper featuring a large central air intake that widens towards its bottom edge. A black honeycomb screen with an aluminum-look surround morphs into the front skid plate. On either side of the intake, two black honeycomb vents contain the foglights. Bi-Xenon headlights with LED Daytime Running Lights and LED rear lighting are also part of the package.

Polished aluminum sills and black trim strips are reminiscent of the original Beetle running boards. Distinctive 18-inch “Canyon” aluminum-alloy wheels, black and silver coloured side mirrors, and “Dune” graphics on both doors are included. A large rear spoiler, a rear bumper design that integrates matte black and aluminum elements, and a rear diffuser that also acts as a skid plate finish off the look.

The Beetle Dune will be equipped with a 1.8-liter direct-injection and turbocharged TSI® four-cylinder engine, offering 170 horsepower and 184 pound-feet of torque, mated to a six-speed automatic transmission.

Other than the choice of colour, the only option on the car will be a technology package, which will add a touchscreen navigation system, an 8-speaker, 400 watt “Fender” sound system and blind-spot detection. 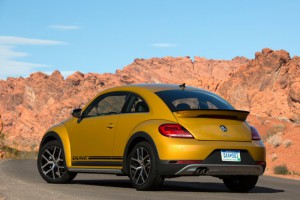 The Beetle Dune is on sale now for spring delivery with a starting price of $26,990.