By westernadmin on February 15, 2016 in Auctions, Ferrari 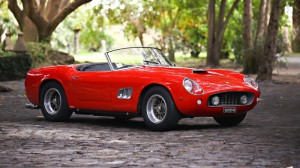 This highly coveted Ferrari is the 22nd SWB California Spider built and one of only 37 covered-headlight examples produced.

Remarkably, it has been in the loving care of the current owner for more than 30 years.

“We are thrilled to present this California Spider to our clients,” states David Gooding, president and Founder of Gooding & Company. “With only three owners from new and a rich and fascinating history, this covered-headlight SWB California Spider has never before been offered for public sale and is being presented for the first time outside of Italy.”

Ferrari introduced the 250 GT California Spider in 1957 on their long-wheelbase (LWB) chassis for the booming North American market. Ferrari’s leading US dealers, Luigi Chinetti and John von Neumann, requested from the factory a dual-purpose sports car that was highly capable on the racetrack, but comfortable for use as a daily driver.

The renowned Italian coachbuilder, Scaglietti, redesigned the California Spider’s coachwork around the updated chassis, resulting in a much more aggressive and sporting appearance.

Despite being a more refined and well-rounded sports car, the SWB California Spiders were true thoroughbreds, with several examples raced at events such as the 24 Hours of Le Mans and the Targa Florio.

Between 1960 and 1963, Ferrari built just 56 examples of the SWB variant, with only 37 being highly sought after covered-headlight versions.

Frattini lovingly owned the car for 17 years before selling it to Terzo Dalia in June, 1978. Dalia participated in two Ferrari events in the early-1980s before selling 2871 GT to the current owner in December, 1985.

This important Ferrari has been with its current owner for the last 30 years, is well-documented by Ferrari historian, Marcel Massini and is presented in the classic colour combination of red with a black interior.