By westernadmin on February 15, 2016 in Motorsport, Rallying 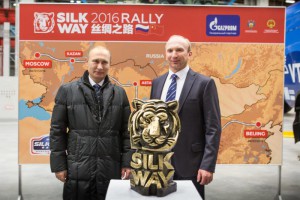 Russian President Vladimir Putin during a recent visit to Tatarstan visited the KAMAZ Plant and congratulated employees and veterans of the enterprise with the 40th anniversary release of the first KAMAZ truck.

During the visit the President asked the team leader and director of the international rally-marathon Silk Way Rally Vladimir Chagin on the preparations for the race, which will take place in July 2016 from Moscow to Beijing.

Chagin reported on the work being done at the moment, he said there is a high degree of interest in the Silk Way Rally from athletes from around the world, presented Putin the new symbols and route competition and spoke about the project, which is supported by China and Kazakhstan.

Russian President positively assessed the progress in the preparation of the rally and wished success in its implementation.