By westernadmin on December 8, 2015 in All British Field Meet 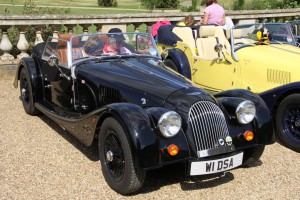 Morgan’s iconic British sports cars have been hand-crafted since 1910.

Over the years, Morgan sports car enthusiasts in British Columbia belonged to the Morgan Owners Group Northwest (MOGNW). That club began in Oregon 40 years ago and grew large enough to have pods in Seattle, B.C. and Vancouver Island.

This arrangement worked well until several years ago when the border line-ups created a stumbling block for members to join each other’s pod events.

Today, with the exception of the VanDusen and Seattle area ABFMs, few people cross the border to attend Morgan events. New members have fewer connections with people in other pods and some of the club camaraderie has been lost.

The upshot was that on November 15, 2015, a group of 23 Morgan enthusiasts met at Win Muehling and Christine Limmer’s home and agreed to form a club.

The new club has been named the Pacific Morgan Owners Group and is in the process of being incorporated under the Society Act of B.C. The club’s name has been approved and the acronym PACMOG will be the shortened version.

At the first meeting, five people agreed to be interim directors until the first AGM is held in the spring. All positions were voted in by acclamation: Win Muehling as president; Ken Miles, vice president; Pat Miles, secretary-treasurer; Steve Blake, membership chair; and Steve Hutchens, editor of The Morgan Link, the club’s newsletter.

Since that meeting, Steve Hutchens stepped down as a director but continues to be the newsletter editor. Bob McDiarmid was selected to fill the fifth director position necessary for incorporation under the Society Act of B.C.

The founding club members were able to fill a calendar of events and 2016 looks to be a great first year for PACMOG.

The purpose of the club is for Morgan owners to share friendships and, of course, drive their Morgans.

The club welcomes new members, and information on joining the club
can be found on the club website http://dunecroft.com/pacmog/index.html.