By westernadmin on January 20, 2016 in Infiniti 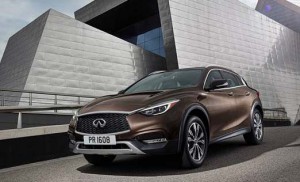 The 2017 Infiniti QX30, Infiniti’s first entry into the compact crossover luxury segment, made its Canadian debut at the Montreal International Auto Show on January 14, 2016.

The Infiniti QX30 remains true to the design cues that guided the original QX30 concept.

While sharing basic exterior and interior designs, the QX30 will be offered in three unique versions, each with its own front and rear fascia, wheel design and exterior themes.

QX30: The crossover’s highly sculpted exterior, unique stance and asymmetric cabin design exemplify Infiniti’s design-led approach to product development. This version is sold in Europe and other regions outside of the Americas under the Q30 name. In Canada, it will be front-wheel drive.

QX30S: With a lower stance, aggressive front and rear fascia, cross-drilled front brake rotors, 19-inch wheels and performance tires, the QX30S is the sports version of Infiniti’s new premium compact crossover line. It was shown at this year’s Los Angeles Auto Show, and is sold in other markets as the Q30S.

The QX30 line for Canada and the U.S. is powered by a 208-horsepower, 2.0-litre turbocharged 4-cylinder mated to a 7-speed dual clutch automatic transmission. It is scheduled to go on sale at Infiniti retailers in Canada and the United States in mid-2016.