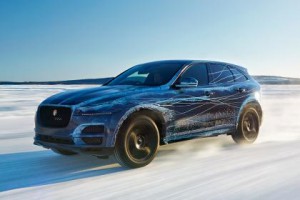 From the ice and snow of Northern Sweden to the searing heat and dust of Dubai, the new Jaguar F-PACE, the first performance crossover from Jaguar, has been tested to the limit in some of the most inhospitable environments on earth.

To ensure that every system functions perfectly under the most extreme conditions, the new F-PACE, which offers a blend of performance, design and practicality, was subjected to one of the most demanding test programs the company has ever devised.

“We developed the F-PACE to offer the ride, handling and refinement demanded from a Jaguar car, together with new levels of ability and composure on a variety of surfaces and weather conditions,” said Andrew Whyman, Vehicle Program director, Jaguar F-PACE. “Just as we paid obsessive attention to detail over the engineering of every single component, we’ve exhaustively tested the F-PACE in the most challenging conditions to ensure that it will exceed the expectations of our customers around the world.”

Jaguar does note that its All-Surface Progress Control is not a substitute for driving safely with due care and attention and will not function under all circumstances, speeds, weather and road conditions, etc.

The testing in Sweden was done to make sure that the F-PACE delivers the connected steering feel and agility fundamental to Jaguar dynamics DNA, whether on asphalt, snow or ice.

In Dubai, ambient temperatures can exceed 50 degrees centigrade in the shade. When vehicles are left out in direct sunlight, cabin temperatures can soar to 70 degrees centigrade. These were exactly the conditions that Jaguar designers felt were needed to ensure that everything—from the vehicle’s climate control systems to infotainment touch screens—functioned perfectly in extremes of heat and humidity.

In addition to hot weather highway driving, the cooling system of the F-PACE was further tested under very high load by driving the vehicle in city traffic where the vehicle experienced a combination of high ambient temperatures and low airflow.

Incorporating hot- and cold-weather testing environments with a variety of new and unique surfaces, Jaguar paid special attention to help make the F-PACE a benchmark in the performance crossover segment. For the first time in a Jaguar development program, the F-PACE was also driven over gravelled mountain passes as part of its validation tests.

Following this testing and development, the F-PACE will debut at the Frankfurt Motor Show in September 2015, with North American sales beginning in mid-2016.