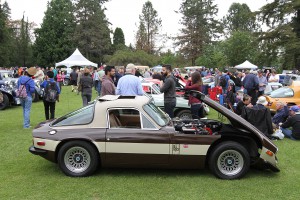 Hot on the heels of the news that TVR is to launch an all-new car in 2017, the company has decided that it will start taking deposits for the car from July 7, 2015.

The decision, which has come sooner than originally anticipated, has been made as a direct result of the huge, positive, public reaction generated by announcement that the company will launch the new car.

Designed in conjunction with Gordon Murray Design and featuring a Cosworth V8 engine, sports car enthusiasts the world over are lining up to buy what promises to be one of the most exciting new sports cars of the decade.

“We’ve been totally blown away by the reaction to the new car,” said John Chasey, operations director of TVR. “Our phone lines and online enquiry system went into meltdown when the news was announced, and we decided that we must begin to bring a structure to the enquiries and build a delivery pipeline well in advance of production. Volumes in year one will be limited as we ramp up production, so this allows us to reward those individuals prepared to make a financial commitment at this early stage.”

TVR will take a £5,000 deposit from all interested parties, with detailed specifications to be established at a later stage. However, the company has also announced that it will offer a limited quantity of reduced deposits to TVR Car Club members during July as a celebration of the 50th anniversary of the Car Club and as a thank you to the established individuals who have demonstrated continued enthusiasm and loyalty to the brand. Anyone who has been a member of the club for more than six months will be offered the opportunity to pay a £2,500 deposit, and TVR will also make a financial donation to the TVR Car Club for each deposit taken from a member.

“We feel it is important to reward those people who have been such enthusiastic ambassadors for the TVR brand,” said Les Edgar, chairman of TVR. “The club is a wonderfully active and loyal community of people who simply love the cars, so it seems fitting that they should be offered a reduced deposit and a promise of some of the early production units. With initial production in 2017 to be in the low hundreds, the early units are likely to be much coveted.”

The company is currently working on building and establishing its UK network of TVR Heritage and TVR Performance partners, many of which will have previously been TVR main dealers, whilst suitable new partners are also being sought. Most of the early cars will be delivered direct from the factory, although a referral scheme will be put in place to reward the network partners for their loyalty to the brand and to assist them in establishing relationships with the new customers in their locality.

TVR was one of the featured marques at the 2015 Vancouver ABFM, with some 18 cars in attendance.

For anyone interested in placing a deposit, please refer to the www.tvr.co.uk or by telephoning 0330 120 0032.