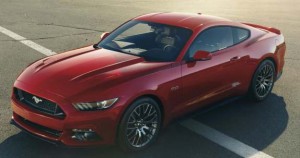 Producing 310 horsepower and 320 lb.-ft. of torque, the 2.3-litre EcoBoost engine fits the bill for a true Mustang powerplant, with the highest power density yet from a Ford engine.

The EcoRun is an annual AJAC event that shows off a variety of eco-friendly vehicles, which include pure electrics, plug-in and conventional hybrids, hydrogen fuel cells, diesel-fuelled powertrains and highly-efficient gasoline options.

The purpose of the EcoRun is to help inform consumers of these alternative options, as well as providing accurate road testing fuel economy numbers. These new vehicles are driven on real-world road conditions in order to fully test for fuel efficiency and the reduction of carbon dioxide emissions.

Thirteen manufacturers participated in the two-day drive from Vancouver to Nanaimo, via BC Ferry, then south to Victoria, returning by ferry to the mainland.

The AJAC EcoRun Green Jersey has always been a highly sought-after award since its inception, following the inaugural showcase run. Last year’s winner, Toronto Star journalist and Motoring TV personality, Jim Kenzie, presented Autofocus.ca’s Chris Chase with the coveted Michelin Green Jersey for the best results in adhering to fuel-efficient driving techniques. The scores were very close, and only off by one point, with Jim Kenzie at 86.1 and Chris Chase at 87.0.

Michelin Canada joined forces with the 2015 AJAC EcoRun to supply the Canadian journalist with a brand-new set of Michelin tires, to go along with the Green Jersey.