By westernadmin on April 2, 2015 in All British Field Meet, MG 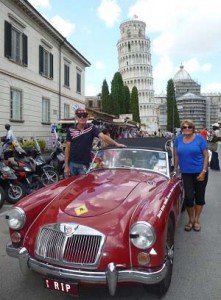 The 2015 Vancouver ABFM, which will be held on Saturday May 16 at the VanDusen Garden, will host a crowd of MGAs in celebration of the vehicle’s 60th anniversary.

One of the more than 50 MGAs in attendance will be an Australian-assembled roadster, which has been driven more than 193,000 kilometres around the world since Dave and Laurel Godwin took ownership of the car in 2004.

The Godwins are members of the North American MGA Register as well as the Gold Coast MG Car Club, and while their vehicle carries the license plate “RIP”, it does not appear that this very special MGA will “rest in peace” any time soon.

Click here to read more details about the Godwins MGA.