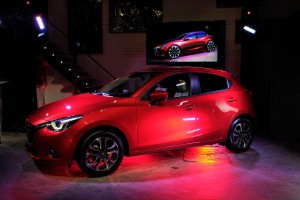 Mazda has unveiled the all-new subcompact Mazda2 for the first time in North America on the eve of the Montréal International Auto Show, the official kick-off of the Canadian auto show season, to be held January 16-25, 2015.

The completely redesigned 2016 Mazda2, which will go on sale in Canada in late summer 2015, is the fourth model in Mazda’s line-up of new-generation vehicles that feature the company’s award-winning SKYACTIV Technology and KODO – Soul of Motion design.

In Canada, the 2016 Mazda2 will be powered exclusively by a SKYACTIV-G 1.5-litre gasoline that is more powerful and up to 20 per cent more fuel efficient than the outgoing Mazda2. Output details and full specifications will be revealed at a later date, closer to launch.

As seen previously on the Mazda3, the new Mazda2 will inherit the Mazda Connect infotainment system, which is paired with an HMI commander and places the highest priority on safety.

The Mazda2 will be on display throughout the run of the 2015 Montréal International Auto Show, along with the 2016 Mazda CX-3, Mazda6 and CX-5 which also makes their Canadian debuts at the show. Additionally, the full lineup of 2015 model-year Mazdas will be on display, including the Mazda3 and Mazda3 Sport, Mazda5, MX-5, and CX-9.