By westernadmin on January 15, 2015 in Harley-Davidson, Motorcycles 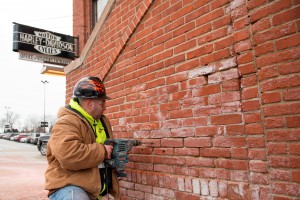 Harley-Davidson Motor Company and the city of Sturgis, South Dakota, are setting their sights far into the future.

“Harley-Davidson riders have attended the Sturgis Motorcycle Rally for decades,” said Matt Levatich, president and chief operating officer at Harley-Davidson. “This new agreement will help fuel many more years of freedom, independence, and rebellion for this iconic gathering. Riding is a passion passed down through generations, so it’s important we celebrate the legacy and history of Harley-Davidson in Sturgis, while helping creating new memories.”

As part of the agreement, a permanent plaza will be built on Main Street in Sturgis that will include a stage for events, concerts, and even weddings. The year-round location, which will be completed in time for the 2015 75th Rally, will be the official Harley-Davidson destination for riders and fans alike.

The 75th Sturgis Motorcycle Rally will run from August 3-9, 2015, and for those who have had Sturgis on a bucket list, this might just be the year to attend.

For inspiration and pictures from the 2014 Rally, visit www.h-d.com/sturgis.