By westernadmin on October 15, 2014 in Motorsport, Nissan, Racing 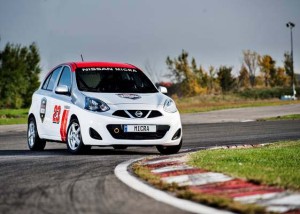 Nissan Micra Cup uses race-ready versions of the 2015 Nissan Micra to bridge the gap between karting and racing.

The Nissan Micra Cup is billed as an exciting one-of-a-kind racing series offering the lowest running cost of any Canadian series and featuring Canada’s most affordable vehicle, the 2015 Nissan Micra.

The Nissan Micra Cup’s inaugural season will take place in Québec, over the course of five weekends starting in May 2015. The Nissan Micra Cup will offers drivers the opportunity to race on some of the most well-known race tracks in Quebec, with the potential to expand to other provinces in 2016 and beyond.

“Quebec has a long history with motorsports and is the main market in Canada for subcompact cars,” said Didier Marsaud, Nissan Canada senior manager corporation communication in email to Western Driver. “As the host of the Formula One Canadian Grand Prix for decades, motorsport is of heightened interest to the citizens of Quebec. For these reasons, we see Quebec as the best opportunity for success in the Nissan Micra Cup’s inaugural year in 2015. This said, JDMS hasn’t finalized any plans for the 2016 Micra Cup series, but our collective hope is to study potential expansion plans outside of Quebec in 2016 and beyond.”

More than 25 Nissan Micras will compete on each race weekend which will include two hours of track time consisting of: a 30-minute trial, a 30-minute qualifying session and two 30-minute races.

The road to the starting line
As part of its development, the Micra Cup race car has been through an intensive testing process handled by a team of motorsport specialists including Jean-François Dumoulin, the well-known professional racer from Québec. The Nissan Micra racing version is a legitimate race vehicle, complete with the following modifications to deliver the upmost in performance, reliability and safety:

The race-ready version of the Nissan Micra will be available by special order to JD Motorsports for the final price of $19,998 (excluding taxes), which includes the installation of all the required safety features, new wheels and tires, NISMO S-Tune suspension and modified exhaust.

A car and motorsport series for the masses 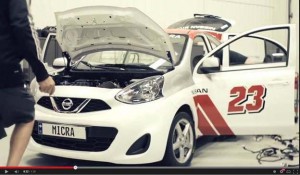 Direct link to the Micra Cup video on YouTube : http://youtu.be/QCh17lB5QPo

The vehicles used in the Nissan Micra Cup are a blend of the stock parts from Nissan, and some high-performance features to ensure the Nissan Micras are ready for legitimate track races.

JD Motorsport Organization, in collaboration with Nissan and NISMO, worked extensively with a team of professionals at Motorsports in Action (MIA) to develop this special racing version of the Nissan Micra, which is constructed on the stock Nissan Micra S (base) model

Young karting drivers, the average Canadian looking for an entry point into motorsport competition, or anyone who wants to experience the rush of adrenaline inherent with racing cars without spending staggering amounts of money are all well-suited to the Nissan Micra Cup series.

To learn more about the Nissan Micra Cup, and place your order through JD Motorsports, visit: www.nissan.ca/micracup

View all posts by westernadmin →
Record attendance at 2014 Beaulieu
According to Tesla’s CEO, ‘The House Always Wins’ in Nevada