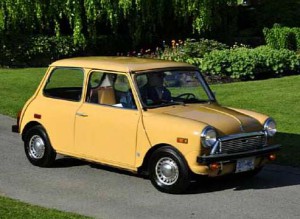 One of the many classic Minis that can be seen each year at the Vancouver ABFM in VanDusen Garden. Photo: courtesy Cam Hutchins.

Said to be the smallest car ever designed around four chairs, British Motor Corporation’s iconic Mini was a marvel of modern engineering and design.

Almost all contemporary automobiles owe something to the Mini: unibody construction, front-wheel drive, transverse engine orientation and four-wheel independent suspension, among other features.

Sir Alec Issigonis didn’t invent all this stuff, but he successfully married it all in one fantastically compact package and sold it for an equally miniscule price. It didn’t hurt that his lightweight car was a ball to drive, too, thanks to its stiff, rubber-cone suspension and the front-drive architecture that positioned each 10-inch wheel at the far corner of the vehicle.

Unveiled in 1959 and initially sold under BMC’s Austin and Morris brands, the Mini was remarkably space efficient. Windows slid sideways to open, freeing up the doors for inset armrests and storage pockets. The car’s welded seams were turned outward in plain view, rather that inward to avoid compromising valuable legroom.

Mr. Bean’s car remained in production until October 2000, although 1967 marked the last year it was exported to America; Canadian sales ended in 1979. It continued to sell well even in developed markets like Japan, whose consumers adored its nostalgic look.

Click here to see a retrospective of Mini through the ages.

The beloved and innovative Mini finished second in a worldwide vote for Car of the Century, beaten only by the Ford Model T.