By westernadmin on August 25, 2014 in Infiniti, Racing 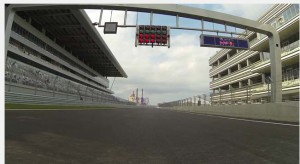 Four-time Formula One World Champion Sebastian Vettel is the first F1 driver to lap the newly completed Sochi Autodrom in Krasnodar Krai, Russia, ahead of the inaugural Russian Grand Prix, which will run from October 10-12, 2014.

An onboard video of Vettel’s full lap can be found by clicking here.

The Infiniti Red Bull Racing driver and Infiniti Director of Performance travelled straight to Sochi from Spa Francorchamps after finishing fifth in the Belgian Grand Prix on Sunday, August 24, 2014. After a tour of the venue’s facilities, he completed a number of high speed laps of the full Grand Prix circuit in an Infiniti Q50 Hybrid. Vettel was joined by former Formula One driver David Coulthard, driving the circuit with VIP guests and media.

Vettel is no stranger to Sochi having visited the venue with Infiniti in April 2013 when the circuit was still under construction. Since then, the complex has hosted the 2014 Winter Olympic Games ahead of the inaugural Russian Grand Prix due to take place on October 12 2014.

The Sochi Autodrom, designed by famed Formula One architect, Hermann Tilke, features 18 corners across 5.8 kilometres and will host round 16 of the 2014 World Championship.

“It is great to be back in Sochi and the venue has been transformed since I was last here when it was really just a construction site,” said Vettel. “Having driven the full circuit for the first time in the Infiniti Q50 today, it’s an interesting layout with a good mix of high speed corners and technical sections. It’s going to be a huge challenge in a Formula One car for sure and I’m really looking forward to coming back in October.”

There have been calls for F1 to boycott Russia in light of the ongoing conflict in Crimea between pro-Russians separatists and Ukraine. Despite this, F1 head Bernie Ecclestone has confirmed that the Russian Grand Prix will go ahead.

“We have a contract,” said Ecclestone, speaking at the Belgian Grand Prix. “Our friends [in Russia] are happy with the contract, we are happy. We will be there. If people have arguments with Russia, maybe they have, but we haven’t got any.”