By westernadmin on October 7, 2013 in Motorsport, Rallying 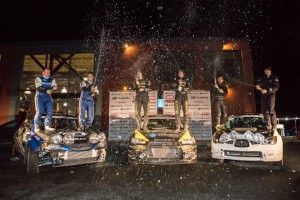 Antoine L’Estage and co-driver Craig Parry won the Pacific Forest Rally (October 4-5, 2013), fourth round of the Canadian Rally Championship (CRC) in their Mitsubishi Evolution; it was L’Estage’s sixth lifetime victory at the Merritt event and 41st of his career. For the Canadian and North American champion, the Pacific Forest Rally is his third straight rally victory and gives Mitsubishi first place in the Manufacturers’ Cup.

The Rockstar team of L’Estage (St-Jean-sur-Richelieu, QC) and Parry (UK) won the first stage of the rally and never relinquished the lead, despite a late-stage charge by the Subaru Canada Rally Team of Patrick Richard (Squamish, BC) and co-driver Rob Fagg (UK).

Richard and Fagg won five of the 14 stages in their Subaru Impreza STi, despite gearbox woes and brake trouble. L’Estage won all of the remaining stages, giving a margin of victory of 44.6 seconds after one hour and 19 minutes of timed competition, contested over two days.

“I like the Pacific Forest because it is a driver’s event, roads have a lot of rhythm and our Mitsubishi performed flawlessly,” said L’Estage. “It was my first event with 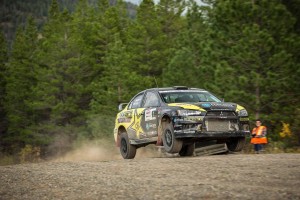 Craig Parry of Wales as co-driver—everything went well as if we had teamed up for years. Our goal is to keep on winning and take the lead in the championship.”

The Alberta team of Wim Van der Poel and Bryan Lord rounded out the top five.

In the two-wheel-drive competition, two teams contesting the Canadian Rally Championship that had hauled from Ontario for this event both ran into trouble on the first day of the rally. Jeffrey and Emily Dowell (Mitsubishi Lancer), and Paul Hartl and Chuck Storry (VW Golf) both had off-road excursions on Friday and were unable to continue. This left the door open for Matt and Dan Bobyn (Calgary, AB) to take the class win in their VW Golf, taking a remarkable sixth overall in the process.

Twenty-four teams contested the rally, including 10 competing in the regional Championship portion.

The Pacific Forest Rally win brings L’Estage to within six points of the lead of the Canadian Rally Championship for drivers with two events left in the season, and sets up an exciting battle at the Rocky Mountain Rally (Invermere, BC) on November 1st/2nd, where another L’Estage-Richard first-second would bring the Championship to a final deciding round at the Rally of the Tall Pines (Bancroft, ON) November 29th/30th.