By westernadmin on October 22, 2013 in Motorsport, Rallying, Subaru 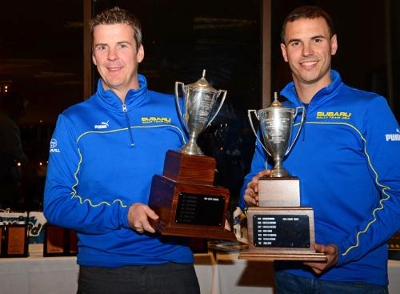 Subaru Rally Team USA’s David Higgins and co-driver Craig Drew were crowned the 2013 Rally America National Champions, with a spectacular victory at the Lake Superior Performance Rally (LSPR) on October 20, 2013; the final round of the 2013 Rally America Championship.   Higgins entered LSPR locked in an epic season-long battle with rival Ken Block.   Block needed a win at LSPR to steal the championship away from Higgins, who had led in points nearly all season.  Higgins and Block both drove flat-out at LSPR, with Higgins edging ahead of Block near the mid-point of the rally. After sustaining heavy damage by rolling his car,  Block retired, handing Higgins the rally win and more importantly the Championship, his third Rally America Driver’s Title in a row.

“It was the fastest that we have ever gone,” exclaimed Higgins at the podium.  “Our Subaru has just been brilliant again. We’ve enjoyed this weekend and that was really the biggest, most important factor. Sure there was a lot of pressure, but we really went out there to have fun.  Rally is a team sport and I’m so proud of the one we have behind us in Vermont SportsCar and Subaru of America. I’m so happy Craig (Drew) and I could step up our game to deliver for the team.

“The Lake Superior Performance Rally has been running for over 30 years and although the course has changed the challenge has not. The event is widely regarded as the ‘oldest, toughest and meanest rally’ on the Rally America circuit. Held in far northern reaches of Michigan’s Upper Peninsula, the event features highly variable weather with technical tree-lined gravel roads. This year’s event featured some slick wet roads as well as some drying roads with better grip on the final day.  Higgins and Drew had the best tool for the job; their Vermont SportsCar prepared 2013 Subaru WRX STI rally car.

The battle began as expected with Higgins and Block trading stage wins early in the event. Block slipped ahead of Higgins by just 8.6 seconds after Day One’s daylight stages.  Higgins then attacked on the night stages which were treacherously slick and foggy. With two big stage wins in the darkness, Higgins closed the day with a 13.6 second lead. “It was dark, it was slippery and it was foggy, just like back home (in Wales, UK)! So I knew that was our time to really attack,” explained Higgins.

The battle resumed on the first two stages of Day Two with Block clawing back several seconds before he crashed heavily on the day’s third stage (stage twelve).  Block and his co-driver were unharmed. Their retirement meant Higgins had  locked in the Driver’s Championship.   With the pressure off, Higgins & Drew treated the final stages as a victory lap.  Higgins went on to win the rally by over three minutes.

The podium at LSPR was an all-Subaru affair with Antoine L’Estage and Dillon Van Way finishing 2nd and 3rd Overall, each at the wheel of a Subaru WRX STI.  Higgins’ victory also earned Subaru the coveted Rally America Manufacturer’s Championship.

“We are very proud of David, Craig and Vermont SportsCar for bringing home the Rally America Manufacturer’s Title to Subaru in the WRX STI,” said Dean Evans, CMO at Subaru of America.  “David and Craig now have their third championship in a row and we look to them to repeat the win next year. We know how big rally is with our enthusiast fan base and we hope to keep making them happy as they follow our motorsports efforts.”

Higgins was the perfect example of consistency in 2013 having finished on the podium at all seven rounds of the championship including three victories and three 2nd place finishes.

See video: Flat-out with the Champions- Ride onboard with Higgins and Drew at LSPR http://www.youtube.com/watch?v=gRaxVcIwv2o