By westernadmin on February 19, 2013 in General 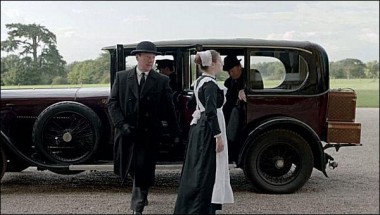 I’m a big fan of British TV shows that regularly appear on public television, especially those that depict an earlier period.

Heartbeat, recreating the 60s, is one of my favourites, now in a complete re-run from season one, for which I’m grateful as I didn’t know the show existed then.

More recently I’ve become enamoured with Foyle’s War, about a small town detective in England during WW2. Brilliantly acted by Michael Kitchen, it reminds us that crime still existed locally even as men and women were fighting in Europe. The mythical town is located next to an RAF base, resulting in spectacular footage of a restored Spitfire.

And then there’s Downton Abbey….. This award-winning series is watched by millions every week, fascinated by the English upper class life of the post-Edwardian era, by the magnificence of the great old manor house (Highclere Castle in Hampshire), by the scenery, by the costumes, and by a talented cast of 20. The latter includes the wonderful Dame Maggie Smith as a dowager aunt who gets all the wittiest lines in the show, along with two American actresses; Elizabeth McGovern (who lives in the UK), and Shirley MacLaine in a special guest appearance.

I look forward to this production all week long. And yet one reason why I enjoy Downton Abbey, along with other British period shows, is its use of vintage automobiles. No other country, including the United States, has so many original and restored classics, simply because the English are fanatic about collecting, thus the directors can conjure up just about any vehicle from any period.

One example is this 1911 Renault CB12/16 hp Laundelette, chauffeur-driven of course, a job not always as 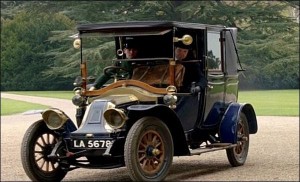 glamorous as it looks, for the chauffeur’s compartment is open whereas the passengers ride in comfort inside. Not that there was any heat coming from the engine; the occupants depended entirely on heavy clothing and blankets to keep warm.

One of the most delightful driving scenes in the just-concluded Season Three involves an AC sports car, with Matthew Crawley driving and his new wife Michelle Dockery as a passenger. In case the brand name doesn’t mean anything to you, it was AC that created the AC Ace and Ace Bristol in the 50s, which was upgraded by Carroll Shelby to be reborn as the legendary Cobra. Nice to discover that more than nine decades ago, motoring could be fun. Maybe even more than today with our crowded roads and massive regulations. 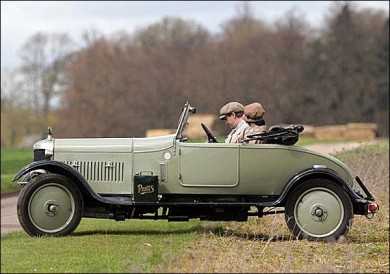 AC sports car, one of the many cars featured on the Downtown Abbey TV series.

The producers may have taken some liberties in matching cars with periods, for this 1925 Sunbeam 20/60 appears in the early 1920s, but we’ll allow them some slack. It at least represents a time when automobiles began to change significantly, becoming more stylish and certainly safer and more comfortable.

Incidentally, the Downton Abbey viewer on occasion gets treated to lovely shots of railway trains and stations. I’m delighted to learn that there will definitely be a fourth season with, no doubt, fascinating cars to match.