By westernadmin on February 21, 2013 in Aston Martin 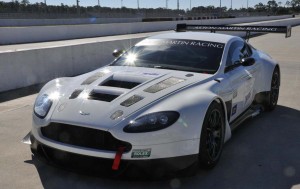 Aston Martin V12-engined GT3 car is a serious contender in the supercar category.

Aston Martin have a lot to celebrate in this their centenary year.  Their product range includes some mouth-watering cars ranging from the V8 Vantage, which hardly qualifies as an “entry level” vehicle starting at $145,000 in Canada, through the delectable V12 Vantage, 4 seat Rapide, Virage, DB9, new Vanquish and, if you can get one, the One-77 – a 725bhp take-no-prisoners supercar.  The entire range, with the possible exception of the One-77, represent a take on high performance motoring that focuses on style, refinement and an experience that is more restrained and less demonstrative than rivals from Italy, but has infinitely more soul than German products.  At the risk of being labelled a sexist old fogey, they are perhaps best described as “Gentleman’s GT”.  Notwithstanding this moniker, they are serious performance cars.

Aston Martin has always been a small player on the 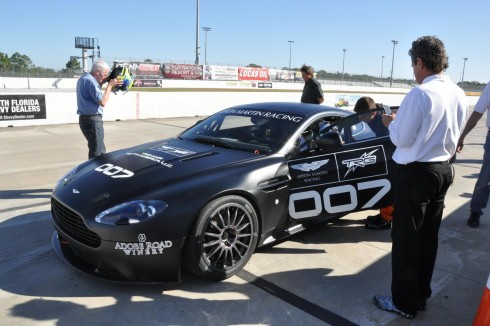 Author dons his helmet ready to be strapped into the GT4.

automotive scene, but through their long history they have succeeded in producing some outstanding cars, many of which are now highly collectible, with current prices in the stratosphere.  They have, for most of their history, found a way to compete in motor racing with notable successes from time to time.  Their current involvement in sports car racing is built around the V12 powered GT3 and the GT4, built by Prodrive in the UK as a competition version of the V8 Vantage.  The GT4, which is an evolution of the previous Vantage based N24 race car, has a 445bhp version of the 4.7 litre V8, uprated suspension and brakes, racing versions of the traction control and ABS systems, revised front, rear and underfloor aerodynamic aids and full safety equipment.  The removal of unnecessary items brings the weight down to 3000 lbs, with 50/50 weight distribution.

GT4s are eligible for the FIA GT4 endurance race series, and the British based GT4 challenge which features 100 lap races.  Aston Martin’s North American racing activity is now managed by the highly respected TRG (The Racer’s Group) with 20 years experience at the top level of the sport and boasting Rolex Series GT championships in 2005 and 2006, a host of wins in Grand Am, four wins at the Rolex 24 hrs and a win at Le Mans.   TRG will offer GT4 customer cars at $190,000 – a relative bargain in today’s racing world – with full race support, or will support drivers on a race by race basis.

Palm Beach International Raceway in Florida was the scene of TRG’s customer test day in early February.  Potential drivers and entrants were invited to test the cars, meet the team and explore the possibilities of a full or partial season’s racing.  Through my son, who is a supplier of high performance parts for Aston Martins and other exotics, I spent a very enjoyable day meeting the people and examining the cars.  The TRG team exudes calm professionalism.  The people I met were all enthusiasts first, many with a racing history themselves, friendly and accommodating.  Promising Canadian Indy Lights driver David Ostella from Toronto was testing all day and put in some very quick laps. 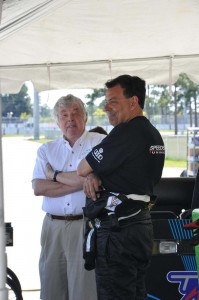 Redman (left) has no shortage of stories to tell.

Part way through the day, racing legend and Florida resident Brian Redman (**see sidebar below) arrived and, of course, was invited to drive one of the GT4s.  Graciously, he agreed to take me along in the passenger seat for a few laps.  After a cautious out lap, Brian poured on the coals and was soon exploring the limits of the car.  I can attest that at 75 he has not lost the fluidity and controlled aggression that were the hallmarks of his racing successes.  Although he admitted to me afterwards that he was not braking as deep into the corners as he might, he was definitely not hanging about!  In fact on one lap he dropped a wheel onto the grass at the exit of the corner leading to the back straight and we enjoyed a high speed “moment”.  Interestingly, his terminal speeds of 145mph + on the straight were higher than some of the young hot shoes were reporting.

My impressions of the GT4 were that it is beautifully balanced with an abundance of grip, outstanding brakes and a very solid, one piece feel – a good package for long distance events.  Brian’s evident talent made me feel very humble about my own short racing career years ago.  He is also a fine human being – unpretentious, easy to talk to and with a repertoire of stories (some unrepeatable) that you would never tire of hearing.  A very enjoyable day.

**Brian Redman achieved notable success in many series at the top levels of motor sport, and survived the 1960s and 70s – an era when the driver casualty rate was very high.  He began his racing career in 1959 and quickly became a hot property in international sports car racing and Formula 1.  Shaken by the loss of so many of his competitors and colleagues, he retired for a short time and then returned with the same level of commitment and success for many more years.  His resume includes three straight Formula 5000 titles, four World Manufacturer crowns for John Wyer, Porsche and Ferrari in partnership with Ickx and Siffert, a Camel GT title and numerous wins and podiums in iconic races at circuits such as Spa, the Targa Florio, Daytona and Le Mans.  His Formula 1 career includes 15 races for Cooper, Williams, Surtees, McLaren, Rob Walker, BRM and Shadow.  His final season of professional racing was for the works Aston Martin team in the World Sportscar Championship in 1989.

He is now retired and living in Florida, but remains very active in historic racing, driving his favourite Porsche 908/3 for the Collier Collection.

John Dickinson is president of Synchromesh Wines Inc., a proud sponsor of the Vancouver All British Classic Car Show (www.synchromeshwines.ca), as well as being an ex-racer and a restorer/collector of classic and interesting cars.