By westernadmin on September 26, 2012 in Jaguar 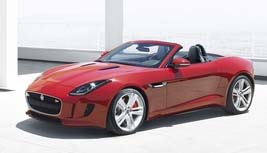 The F-TYPE, an all-new, two-seater Jaguar sports car has been unveiled in Paris in front of the dramatic setting of the 18th century Musée Rodin.

Visually, the F-TYPE’s exterior demonstrates a new sports car design language for Jaguar, with cleaner lines delivered through the discreet use of technology such as deployable spoiler and door handles.

“Jaguar is a founder member of the sports car segment with a rich sporting bloodline stretching over 75 years, and in the F-TYPE we’ve reignited that flame,” said Adrian Hallmark, Global Brand Director, Jaguar.  “The F-TYPE isn’t designed to be like anyone else’s sports car. It’s a Jaguar sports car – ultra-precise, powerful, sensual and, most of all, it feels alive.”

Following the reveal, singer Lana Del Rey took to the stage and performed a new track ‘Burning Desire’, that she has written as part of her collaboration with F-TYPE. The track is confirmed to be the sound track to a short film that is being produced in association with Ridley Scott Associates and will feature on her new album.