By westernadmin on September 27, 2012 in Motorsport, Rallying 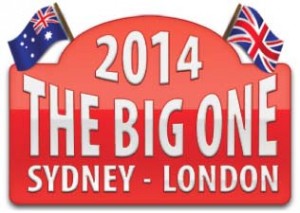 Trans World Events (TWE) ran the last London-Sydney Marathon Rally in 2004 and now the Rally is back. . . with a twist – it will be run in the opposite direction!

The event is a special stage gravel and asphalt rally for pre-1981 classic cars, with certain modifications allowed for the long distances. Most days there will be up to six special stages.

It was first run in 1968, a second event was organised in 1977 and a third in 1993 to commemorate the 25th anniversary of the original. Two further rallies have subsequently been contested in 2000 and 2004.

The route for the 2014 race will start in Sydney on April 12 and head west to Perth, from where cars will be airlifted in the giant Antonov transporter planes to Turkey while the crews travel in a chartered passenger jet.

After Turkey, the rally runs through Greece, Bulgaria, Serbia, Bosnia, Croatia, Italy and France, before crossing to the UK, where there will be a sting in the tail with stages on the Epynt Ranges in Wales, before heading for London and the Finish on 11 May 2014.

When first announced in 2010, the event was for Classic Rally cars only and without service vehicles. Following representations from potential entrants, the organisers hope to make an announcement soon regarding a Challenge/Touring Category and Service vehicles.

The entry fee for two people and their car is US$52,000, which can be paid in instalments. This includes accommodation and airlifts before or after and during the event.