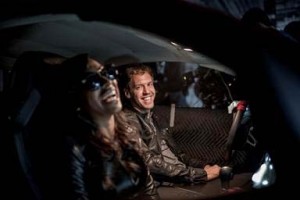 Double Formula One World Champion Sebastian Vettel has taken on a driving job with a difference—starring in a music video with double Grammy-winning US R&B star and protégé of Jay-Z, Melanie Fiona.

The Red Bull Racing driver and Infiniti Global Ambassador plays a central part in the official global music video for Fiona’s track ‘Watch Me Work’, from her album ‘The MF Life’ on Universal Records.

The high-energy piece, set in downtown New York, sees Vettel play a modern day James Dean character searching to find an underground location for Fiona and her band to perform. Vettel emerges driving a red Infiniti G37 convertible to an enormous warehouse space, powering up the lights and the sound system and taking control of the volume. Happy with his work, Vettel’s character departs the scene and is seen driving into the Manhattan sunrise.

The video is the latest in the ‘Infiniti Inspired Performers’ series, which sees Red Bull Racing drivers Sebastian Vettel and Mark Webber collaborating with other top performers in different disciplines. It was shot on location in New Jersey in June when Vettel drove the proposed New Jersey F1 Circuit. The 25-year-old German driver also took the opportunity to take the R&B star on a high-speed lap of the circuit, where she got a taste of his high performance world.

It’s the first time that Canadian-born Melanie Fiona has featured a sports star in one of her videos. She is no stranger to collaborations though, having worked with Jay-Z, co-written songs with Rihanna and toured with Kanye West, among others. She is also no stranger to Infiniti’s vehicles, growing up with the marque that her family have owned for years.