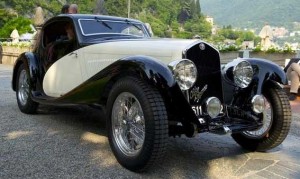 A 1933 Alfa Romeo that its owner longed for as a youngster growing up in South Africa took home the “Coppa d’Oro Villa d’Este” honors at the Concorso d’Eleganza Villa d’Este. The award is voted on by the attendees at the first day of the event, on the shores of Lake Como in Italy.

David Cohen said he often saw the Alfa Romeo 6C GS 6th Series when he was riding his bicycle as a boy in South Africa and could only dream of one day owning the car.