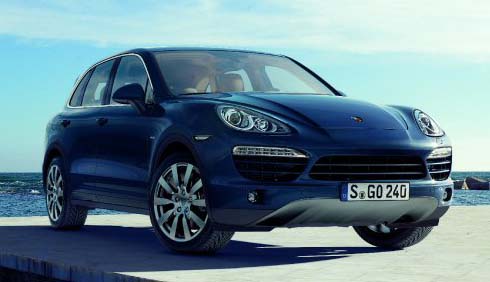 The Porsche Cayenne sport utility family gets a new member for 2013: the Cayenne Diesel.

Originally introduced to the diesel-dominated European market in 2009, clean diesel technology and its many consumer benefits will now available to Porsche customers in Canada for the first time.

The new-for-2013 Porsche Cayenne Diesel’s powerful, yet fuel-efficient, 3.0-litre V6 turbo diesel engine delivers 240-hp and 406 lb.-ft. of torque, available from as low as 1,750 rpm. The result is 0-100 km/h acceleration in just 7.6 seconds and a top track speed of 218 km/h. That performance is expected to be complemented by a 30 per cent increase in fuel efficiency over the equivalent gasoline engine.

The Cayenne Diesel is built to meet strict emission standards, and includes selective catalytic reduction (SCR) technology. The SCR system is comprised of an AdBlue tank located in the car’s spare-wheel well, a heating system for this tank and the lines which carry the AdBlue, an injection valve for AdBlue fluid and a selective catalytic reduction converter, all of which aid in the reduction of NOx (oxides of nitrogen) emissions.

Highlights of the 3.0-litre V6 diesel engine in the Cayenne Diesel include high pressure common rail fuel injection and a variable vane geometry turbocharger, which give the engine improved response to driver inputs and enhanced fuel economy when compared to more conventional diesel engine technologies. In addition, the engine block is constructed from compacted graphite iron (CGI), which has many of the strength properties of an iron block but with a significant reduction in mass.

The Cayenne Diesel is equipped with an 8-speed Tiptronic S transmission, without the auto start stop function available on other Cayenne variants. As with the Cayenne S Hybrid, the Cayenne Diesel includes Porsche Traction Management (PTM), which features permanent all-wheel drive and a mechanically-locking rear differential. To further differentiate this model, Diesel badges are present on the left and right front fenders.

The Cayenne Diesel also comes standard with a system to protect the driver from fueling the vehicle with the incorrect fuel. A mechanical safeguard in the fuel tank filler neck ensures that the locking mechanism can only be opened by the larger diameter diesel fuel pump nozzle and that refueling will only begin at that point.

All Cayenne models benefits from a number of changes for 2013. These include the addition of door locking and unlocking buttons near the front door handles as well as a new analog clock mounted on the top centre of the instrument panel. Also new is the introduction of a new European delivery program in which Cayenne models may now be ordered for delivery at their birthplace in Leipzig or at the Porsche factory in Zuffenhausen.

The Cayenne Diesel arrives in Porsche dealerships in September and will be priced starting from $64,500.