By westernadmin on April 26, 2012 in Motorsport, Racing 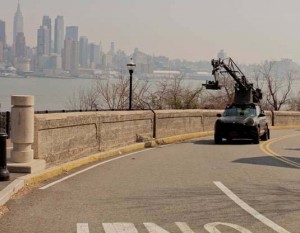 Lights! Camera! and soon, Action! – A specially equipped Porsche Cayenne camera car was recently employed for on-track filming of a video to promote the race at the site of the 2013 Grand Prix of America at Port Imperial in Weehawken and West New York, New Jersey.

With the New York City skyline in the background, the Porsche, approaches the top of the steep Palisades as the 3.2-mile track climbs more than 165 feet above the Hudson River.

Construction on garages and pits has begun, agreements have been finalized with the cities of Weehawken and West New York and track engineering including pavement and course testing has been conducted.

In just 14 months, 24 Formula One cars will race on this street circuit at speeds approaching 220 MPH.