By westernadmin on February 2, 2012 in Porsche 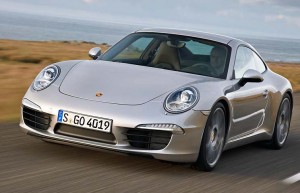 At 48, the Porsche 911 Carrera is younger than ever. The completely redesigned seventh-generation sports car icon with its sleek and stretched silhouette, exciting contours and precisely designed features is undeniably 911 in looks, but incorporates numerous updates and innovations.

The 100 mm longer wheelbase and reduced overall height underpin the fresh, athletic yet elegant appearance. This new lightweight body is an aluminum-steel composite construction and contributes greatly to the 45 kg weight reduction when compared to the previous 911 body. When combined with the greater structural rigidity and optimized aerodynamics—including a wider, variably extending rear spoiler—the new 911 Carrera’s front and rear lift has been reduced to near zero while retaining the Cd value of 0.29.

To complement the modern exterior design, Porsche designers created an interior reminiscent of the Carrera GT. The driver is now even more closely integrated within the cockpit thanks to the rising center console and high-mounted shift lever or gear selector located close to the steering wheel. As with the exterior, classic Porsche elements abound inside. Present is the instrument cluster with five round gauges: one of them a high resolution multifunction screen, and of course the central tachometer and the ignition lock to the left of the steering wheel.

The new 911 Carrera and 911 Carrera S raise the performance and efficiency bar yet again. All versions consume significantly less than 10 litres of fuel per 100 kilometres (official Transport Canada fuel consumption figures are TBD) and fuel consumption and emissions can attain nearly 16 per cent lower figures in the New European Driving Cycle (NEDC) when compared with its predecessor. This is achieved through systems such as the Automatic Start Stop function, engine and transmission thermal management, electrical system recuperation, the world’s first seven-speed manual transmission and, in conjunction with the Porsche Doppelkupplungsgetriebe (PDK), the ability to ‘sail’ or coast. The new electro-mechanical power steering offers not only Porsche’s typical precision and feedback but also helps increase efficiency.

At the same time there are performance improvements in both models. The 911 Carrera S with PDK accelerates from 0 to 100 km/h in 4.3 seconds. Using the Launch Control function of the optional Sport Chrono Package cuts that to 4.1 seconds. The 911 Carrera with PDK needs only 4.6 seconds to sprint from a standing start to 96 km/h (4.4 seconds when using the optional Sport Chrono Package’s Launch Control function). Top-track speed for the 911 Carrera S and 911 Carrera is 304 km/h and 289 km/h, respectively.

The new 911 offers both better longitudinal dynamics and unprecedented top performance in terms of transverse dynamics. In addition to the longer wheelbase, the greater agility, precision and driving stability are based, among other things, on the wider front track, the new rear axle and new electro-mechanical power steering. Depending on the model, there are other standard or optional active control systems available that can help further enhance the overall driving dynamics. That is especially true for the Porsche Dynamic Chassis Control (PDCC) active roll stabilization system, available for the first time on the 911 Carrera S. The system helps reduce lateral roll when cornering and helps keep the tires in the optimal position relative to the road surface.

Together, these enhancements helped the new 911 yield a Nurburgring lap time of 7 minutes and 40 seconds, which matches not only the 911 GT3 but also the current 911 Turbo. This speaks volumes about the capabilities of the new car

The first new 911 models will arrive in Canadian dealerships in February 2012. The new 911 Carrera Coupe has a base MSRP of $93,700, while the 911 Carrera S Coupe’s base MSRP is $110,000. Both models include substantial additional equipment when compared to the previous models.