By Mike Tate, on location at Goodwood 2011 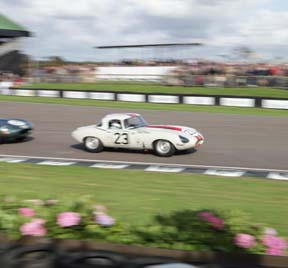 It is like any other vintage or classic race weekend . . . one day’s practice and qualifying, then two days racing—but that is where the similarity ends!

It is neither the sheer majesty of the quality of racing cars and motorbikes entered at Goodwood, nor the absolute and relentless pressure that they put upon each other lap after lap, but also the well-established races and tributes that are programmed for the enjoyment of the suitably period-dressed spectators.

The races at Goodwood have historical significance and belong to event’s heritage. It is, for example, like going to Epsom for The Derby or Newmarket for The 2,000 Guineas to be at Goodwood for The Sussex Trophy or The Madgwick Cup—one  is attending not only an major event but contests of significance within it.

This year, the weather gods were in a mixed mood and the puffy cumulus clouds were joined by dark nimbus from time to time with the promise of rain keeping the tire crews and mechanics on their toes. 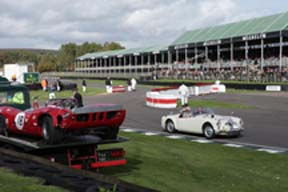 WOOPSIE! Paul Knapfield’s Lola T 70 Spyder gets a Flatbed tow as an ex-police MGA drives by with interest!

Despite the dubious sky, practice and day one were kind to the Goodwood Revival C.E.O. and estate owner The Earl of March, but on day two the dark clouds gathered in force eventually sending showers and finally a downpour of majestic proportions to all and sundry both on and off the track.  The mood of the meeting changed not a whit as a result of the rain and most of the race cars just jousted on with frantic wipers doing all they could to clear restricted visions.  Of course for the spectators it became doubly exciting as the rooster-tails behind the competitors shrouded the track with a misty curtain making for slippery conditions and putting the drivers on a fine edge of judgement.

Day one and two of racing follow a similar pattern as some of the cups and trophies are cumulative and one gets to see most of the great and brave race twice just like a good encore at a concert.  The menu for this tasty offering of fine racing went as follows: 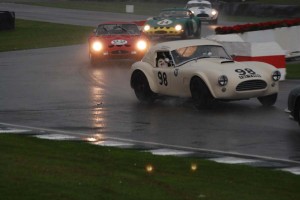 For Grand Prix and Voiturette race cars racing between 1930 and 1950.  ERAs, battled against an Alfa Romeo 308C, Maserati 4CM, 6CM and 8CMs a Talbot Lago and a very rare Alfa Romeo Tipo B, to name but a few. 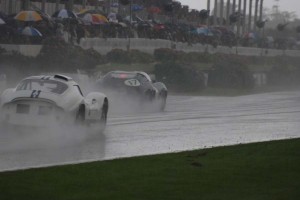 Number 3 Derek Hill in the Maserati Tipo 151 Chases Number 17 Dickie Attwood in a Lister Jaguar Coupe as the rain buckets down!

The Earl of March Trophy:

For 500cc and Formula 3 race cars of the period 1948 to 1959.  This provided some of the most closely fought battles of the weekend and is a regular crowd pleaser.

A two-part race for 1960 to 1966 Saloon Cars, surely the golden age of touring car racing.  This was a race of the mighty and the giant killers from the seven-litre Ford Galaxies to the 998cc Minis and 1275cc Mini Cooper S with everything in between from Lotus Cortinas, Alfa Romeo GTAs, BMW TiSas and even a Saab 93 two-stroking and three-gearing its way in the pack. The spectators loved it and loudly cheered both the Mighty and the challengers.

This is a race for 1963 to 1966 sports racing prototypes. An amazing array of Ford GT 40s, Lola T70s, McLaren-Chevrolets and even a rare Marina Rolls-Royce raced their way around the Goodwood track.

Featuring only E Type Jaguars up to 1966. This was a magnificent spectacle honouring the featured manufacturer Jaguar that may not be bettered for some considerable time. Truly a sight to behold.

For the type of Formula Cars that raced between 1948 to 1959.  More Formula Junior race cars are being restored and raced around the world today and they are not only fun to race but wonderful to watch.

For cars in the spirit of the famous Goodwood nine hour races of the fifties such as the C Type Jaguar, Austin Healey 1005, Aston Martin DB3 and DB3s.  These icons were joined by period Ferraris, HMWs and Allards.  There are no words your intrepid author can find to describe this eyeful!

For sports-racing cars under three litres that raced between 1960 and 1966.  The usual bevy of immaculate Elvas, Lotus’s, Merlyn-Fords and even a Brabham Climax BT8 competed in fine form.

This race featured closed cockpit cars in the spirit of those raced in the RAC TT races of 1960 to 1964.  This hour long extravaganza was the highlight for me.  To see Aston Martin DB 4 Zagatos plus their Project 212 and 214 cars, Ferrari 250 SWBs and 250GTOs, a Shelby Amerian Cobra Daytona Coupe and even a Maserati Tipo 151 in Camoradi colours racing simply took my breath away.

For 1.5-litre Formula One and Tasman race cars from 1961 to 1965. Lotus, BRM, Cooper Climax, Brabham and a recreation Shark-nose Ferrari in Equipe Nacional Belge yellow were out there to strut their stuff in fine form.

Featuring World Championship Sports Cars and production sports racing cars from 1955 t0 1960. Listers, Jaguar D Types, Maseratis, Ferraris, Aston Martin DBR1s and even the Balchowsky-Buick ‘Ol Yeller Two’ Special was having it out on the track.

As you can see from the aforementioned races and considering that some of the finest of the Marques were out to play, it was an incredible spectacle from the first green flag to the last chequered one.

If that was not enough, sandwiched in between was a tribute to the five-time world championship winner, the incomparable Juan Manuel Fangio—‘El Chueco’—on the 60th anniversary of his first World Championship win.  A magnificent on-track display of old racing motorbikes and a centenary celebration for Ford of Britain.

There was also an incredible tribute to the Supermarine Spitfire both on the ground and in the air!  Oh yes, did I mention there was also a flying visit from the arguably the greatest British bomber of World War II, the Avro Lancaster!

Was it all too much?  Not a bit!  I would do it all again in a heartbeat and many of the competitors and spectators I spoke to had been to all 10 Goodwood Revivals and were going to be back again next year rain or shine  . . . That’s the spirit!  Perhaps I will, too!

View all posts by westernadmin →
A Flight of Fantasy: The Goodwood Experience
2011 Ford F-150, with all-new powertrain line-up