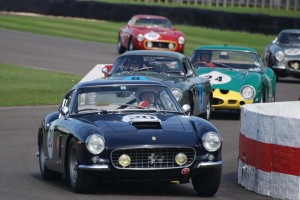 By Mike Tate–on location at Goodwood 2011

It is not the roar of unrestricted exhausts, the multi-million dollar race cars lined up in the paddock row upon row or the unbridled excitement of the action on the famous Goodwood race track.  Nor is it the magnificent air display or the feeling of a sense of history being at the famous Battle of Britain aerodrome of Westhampnett.  It is not even the stunning array of Supermarine Spitfires parked on the grass.  It might be the wonderfully impassioned spectators that dress in costume circa the 1930s to the 1960s or the carneys at the fairground and colourful side shows.  It is not one of the aforementioned, but it is all of them rolled in to one and baked in a rich pie fit to be set before a King.

It is, if you will, a flight of fantasy created by Lord ‘Freddie’ Earl of March; he is not distant he is amongst the people, he talks to many and he stands on no pedestal, he is totally devoted to his revival creation. 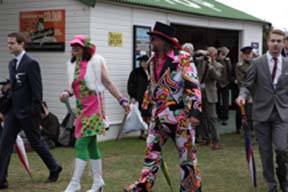 Goodwood is complete and fulfilling, rich and delicious.  One is immediately aware that the spirit of Goodwood is carried by the spectators as Ascot wears a hat and Wembley sings a song, so Goodwood dresses up!

The line of cars starts well out on the Portsmouth road but all is calm and well directed as the drivers and their passengers listen to ‘Goodwood Radio’ as they patiently proceed to their respective car parks. The closest field is traditionally saved for cars of the era and line upon line of Jaguars, Ferraris, MGs, Rileys, Porsches, Austin Healeys, Bentleys, you name it and it was there, line your sauntering route to the track. 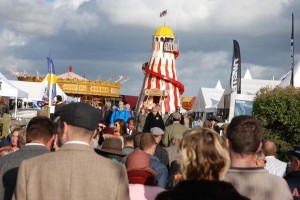 In costume (above) and on a carousel (left) at Goodwo0d.

Onwards through the fairground and the many tempting vendors tents one proceeds, past the Goodwood shop down under the track via the tunnel and then taking a sharp left one arrives at the first of several paddocks loaded with the finest historic race cars in the world.

Overwhelming?  Perhaps, but then once in a while it is good to be overwhelmed.  Many of the race cars one has read about for years, race cars that have created the history of the sport, are lined up being fettled and prepared for action.  It is the menagerie, the side show, for the circus is yet to come.

Not far away is a display of historically significant aircraft, attended and polished by experts ready and willing to share their knowledge with interested parties.  The prototype Spitfire is there, a Swordfish—the aircraft that slowed the battle cruiser Bismarck for the Royal Navy’s cruisers to finish her days.  A Messerschmitt ME 109, the arch enemy of the Spitfire, is there in menacing silence and so many more for contemplation and review.  Beyond the air display, quietly aligned in a neat row on the grass, is a squadron of Spitfires ready for flight and fly they will to the delight of one and all.  Goodwood is a museum of living revival presented by people who are essentially curators of 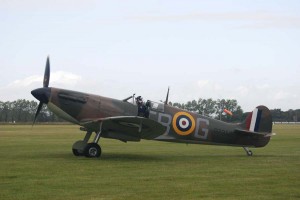 living history and preservers of the art and architecture of a time past.

When finally surveying the track one is as much taken in by the mood of the crowd as by the quality of the grid.  There is a sense of anticipation as the three-minute board is displayed.  The engines fire, a wisp of smoke floats across the grandstand carrying  an old familiar bouquet of gasoline and oil and then suddenly at the drop of a flag the heat of battle is on.

Sliding this way and that looking for room,  leaving  tracks of dark rubber imprinted in the Macadam and with a noise that is quite beyond words to convey the race cars hurl themselves toward Madgwick corner and on thundering through the long left sweep of Fordwater and so to St. Mary’s and the tight left hander at Lavant.  The famous Woodcote corner is next and then the jostling for position and gear selection before the chicane . . . through they go and hard on the throttle past the Grandstands at the end of lap one.  The crowd cheer for their favourites; the cars race on and yes they do race, no half measures here but all or nothing at all.

It is within this all out effort that one feels the sense of history, this is not a museum, this not a half hearted effort to ‘parade’ these historical machines before one’s eyes; it is to all intents and purposes, real and immediate with all the dangers that lie within.  When the winner takes the chequered flag it is won, it is earned the hard way, by skill and courage, it is a genuine victory.

There is much debate as to whether these irreplaceable machines should be subjected to this destructive pressure but one gets the feeling that the engineering expertise surrounding them is all they need to continue to perform.  There is current and serious debate as to what is period correct and what is not but that discussion is for another day for all I can see is what lies before me and it is Goodwood at its best and all is right with the world.

View all posts by westernadmin →
Revived Jensen Interceptor to be built in Coventry
The Power and the History: The Goodwood Experience