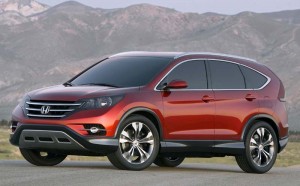 Honda has released pictures of its CR-V Concept providing a hint at the styling direction for the all-new, fourth-generation 2012 CR-V, which is scheduled to go on sale in Canada early next year.

In addition to all-new exterior styling, the 2012 CR-V will feature an all-new interior with a more spacious design, lower cargo floor and enhanced packaging.

There will also be a new, Canadian-exclusive Touring model.

Compared to the current-generation CR-V, the concept model has deeper sculpting of the body lines and a bolder front fascia. The front bumper’s smooth-flowing lines are highlighted by a horizontal three-bar grille and deeply set multi-reflector headlights. The lower front bumper wraps upward to convey SUV capability, while the lower front bumper design now integrates more smoothly with the fascia for improved aerodynamics.

The CR-V’s signature vertical rear taillights will remain for 2012 with a more three-dimensional style that wraps further into the design of the vehicle.

Currently in the fifth year of its model cycle, the 2011 CR-V was among the highest-ranked vehicles in its segment for initial quality in J.D. Power & Associates’ 2011 Initial Quality Study (IQS).