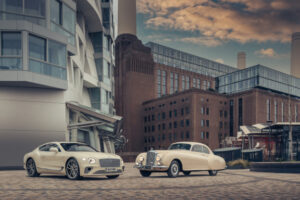 Bentley Motors has handcrafted a unique and one-off Continental GT Azure, inspired by its retained example of the iconic R-Type Continental, JAS 949.

The new Continental GT is in honour of JAS 949’s 70th birthday, celebrating one of the essential style icons in Bentley’s history.

JAS 949 is one of only 208 examples of the R Type Continental ever built—but the car had a more significant impact than the limited numbers suggest. The beautiful Bentleys, old and new, have been photographed at an equally spectacular London landmark, south London’s Battersea Power Station, a 21st-century reinvention of a 1950s icon.

Described as “a modern magic carpet which annihilates great distances,” the R-Type Continental was the fastest four-seat luxury saloon in the world when launched in 1952. The three key design lines of the car—the power line from the front wheel, the rear haunch and the roofline—were the inspiration for the first generation Continental GT in 2003 and every Continental GT since.

The latest Azure members of the Continental GT family continue to celebrate elegance and timeless design, directly descended from the R-Type Continental, while adding a focus on well-being behind the wheel.

Using Mulliner’s Personal Commissioning Guide, the new Continental GT Azure pays homage to one of the most iconic members of Bentley’s 43-car Heritage Collection. JAS 949 is Bentley’s own R-Type Continental and resides in the newly opened Heritage Garage at Bentley’s carbon-neutral campus in Crewe.

Bentley acquired JAS 949 in 2001 and has maintained it in excellent mechanical order while sympathetically preserving its patina. The car continues to be driven regularly on the road.

Dr. Rowland Guenin of Switzerland, the first owner of JAS 949, received it in December 1953. He ordered it in ivory with a red interior and a manual gearbox, a specification it retains today, along with the original 4.6-litre engine.

To recreate the closest specification for the modern interpretation of JAS 949, a new Continental GT V8 Azure has been hand painted in Old English White—a faithful re-creation of the heritage paint colour that dates back to the 1950s. As per its muse, the Continental GT comes fitted with bright chrome (including the matrix grille). While JAS949 rides on 16” wheels, the newer version runs on 22” hand-finished wheels in a black and polished finish, as per the original.

In-cabin Cricket Ball leather provides a cosseting, deep and rich heritage feel for the driver and passengers, mirroring the hide colour of JAS 949. Hand-applied piping in Beluga leather brings accents to the seats to provide contrast and preserve the cabin’s design lines.

Bentley was obsessive in his pursuit of smoothness and refinement. “I have put up with a lot of noise in my time, but I don’t like it,” he wrote in his autobiography, adding, “I hate noise for the sake of noise. To me, 70 mph in silence is far more creditable than a noisy 80 mph.”