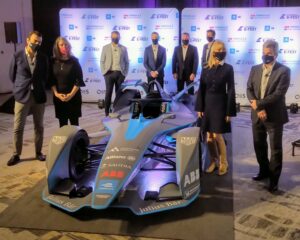 The countdown has begun toward a one-of-a-kind, three-day Canadian E-Fest in Vancouver from June 30-July 2, 2022.

E-Fest organizer is the Canadian OSS Group, an independent promoter involved in motorsports events to bring awareness of environmental leadership to the world.

More than just a race weekend event, E-Fest will be headlined by the ABB FIA Formula E World Championship, where the world’s leading all-electric race series will take to the street of Vancouver for the first time.

Both the Formula E and Celebrity Race will feature Grid Kids, providing 24 children with the opportunity to create lifelong memories around up-close exposure to the stars and the Formula E drivers and their cars.

E-Fest will also offer plenty of action off-track, beginning with a creative business conference on sustainability followed by evening performances from Canadian stars.

The expectation is that the event will top $80 million in economic value and create approximately 3,000 jobs.

More information is available at www.canadianefest.com, including a definitive schedule for the 3-day Canadian E-Fest.