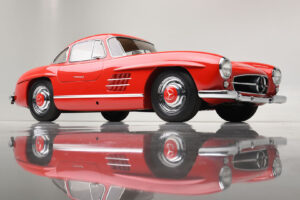 Barrett-Jackson will celebrate 50 years of The World’s Greatest Collector Car Auctions with a docket filled with uniquely collectible vehicles, all selling at No Reserve, including a restored 1955 300SL Gullwing Coupe (Lot #1415) during the annual Scottsdale Auction at WestWorld of Scottsdale, January 22-30, 2022. One of only 855 made in 1955, the Gullwing was initially delivered to Havana, Cuba, and subsequently rallied by professional race car driver Santiago “Chaquito” Gonzales.

“Some of the star collectible vehicles crossing the block at No Reserve in Scottsdale come with significant provenance,” said Craig Jackson, chairman and CEO of Barrett-Jackson. “The 1955 300SL Gullwing Coupe is one of those vehicles that we’re truly excited to offer at No Reserve. Not only is this Gullwing one of just 1,400 of an entire production run, but its pedigree also includes a first-place win at the 1957 Havana Gran Premio National Race.”

Special ordered from the factory with Strawberry Red Metallic paint, the vehicle’s initial owner, the Ministry of Police in Havana, Cuba, took possession on June 16, 1955. It was rally-driven during the first part of its life, then purchased in 1961 and imported to the United States.

Also up for auction is a 1969 Chevrolet Camaro RS/SS “Cutaway” Coupe (Lot #1369), one of only two known “cutaway” promotional display cars used in 1968. Referred to as the “Double Header Car,” Chevrolet used it in 1968 to promote its new 1969 Camaro model. The Camaro’s body is a “first day of production body,” much of which is still in its original condition and features an original GM straight-6 cutaway engine.

“Our bidders will not only have the chance to take home an incredible vehicle from Scottsdale but also a true piece of automotive history,” said Steve Davis, president of Barrett-Jackson. “A rich heritage combined with exceptional collectability, many of these vehicles will be the centrepiece of any collection.”

Lot #1312 is one of only 248 1962 Porsche 356B Roadsters that received coachwork by D’Leteren Freres. The vehicle is black with a tan interior, powered by a matching-numbers flat four-cylinder engine with a four-speed manual transmission.

Those interested in being a part of the 50th-anniversary celebration in Scottsdale may consign their collector vehicle here.

Those interested in registering to bid for the 2022 Scottsdale Auction may do so here.

To purchase tickets to the event, click here and VIP packages are available here.