By westernadmin on July 30, 2021 in Honda, Motorbikes, Motorcycles 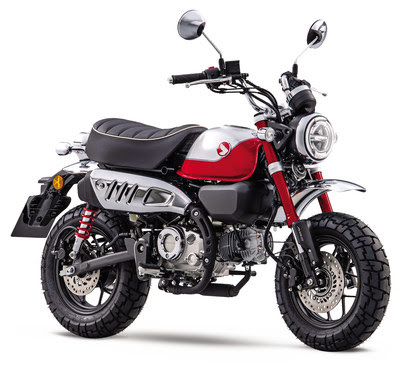 The pocket-sized Honda Monkey has a six decades old history, a fact that no doubt contributed to the enthusiastic reception that this current iteration enjoys, and for which Canadians have been requesting. Now, for the first time, the Monkey is available in Canada.

The bike’s heritage extends back to 1961, when the original version was used in a Honda-owned Japanese amusement park called Tama Tech. Tama Tech Park was owned by Honda and revolved primarily around motosports in one form or another. Visitors to the park, particularly the ones who first rode the bikes were the first ones to be described as looking like monkeys because of the way in which riders looked when riding—arms and legs sticking out at weird angles and, depending on the rider’s size, backs hunched over like a circus monkey.

Today, the desire for an easy-to-handle motorcycle that puts smiles on faces remains alive and well. A master of fun, the 2022 Monkey builds on that passion, while opening the door to the next generation of enthusiasts.

The 2022 Honda Monkey is powered by a torquey new engine with a fifth gear, the same powerplant as the new 2022 Grom, which Honda announced in March 2021. When it comes to miniMOTO models, Honda is an industry leader, and there’s no better example of that than the legendary Monkey. Its latest generation honours history and tradition with looks and spirit that are faithful to the Monkey’s earliest concept, but it touts modern features that help it perform well and run reliably.

Changes are designed to provide not only peppy acceleration from low speeds but increased top speed as well. The 124cc two-valve, overhead-cam, air-cooled engine has an undersquare design, with a narrower bore and longer stroke.