By westernadmin on March 16, 2021 in All British Field Meet, Jaguar 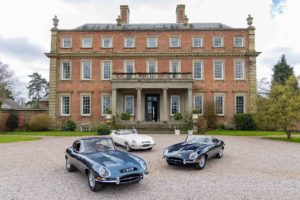 Two of the most famous E-Types in the world have taken part in a special birthday run to celebrate the opening of the 31st Geneva Motor Show on March 17, 1961, when the E-Type was unveiled to the public for the first time and described by the media as a sensation.

On the opening day of the 1961 show, Jaguar received a flood of orders for the car and it is believed that the first sale was to M. Jacques Charrier, husband of Brigitte Bardot. The French film star then drove from Rome to test the 150-mph car. There was no advertised price for the car at the 1961 show, but press reports suggested that it was selling for approximately $4,945 CDN.

The run was organized by one of the world’s leading restoration companies, Classic Motor Cars (CMC) of Bridgnorth, Shropshire, which has restored more famous E-Types than any other company and won restoration of the year twice for work it has carried out on Jaguar cars.

“The company was set up 28 years ago with the prime objective of restoring Jaguar cars and in particular E-Types,” said Nigel Woodward, managing director of CMC. “During that time it has restored hundreds of E-Types, many of them famous early outside bonnet lock cars. We now have a worldwide reputation for restoring other marques to the same exacting standards.” 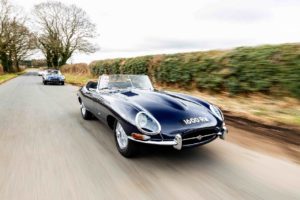 Jaguar 1600 RW on the road with 1VHP. Photo: Tom Clutterbuck.

E-Type 1600RW: Chassis Number 4, Lofty England’s E-Type, the first E-Type ever sold, and 1VHP, the very first right-hand drive production Jaguar E-Type Fixed Head Coupe, both restored by CMC, were two of a number of cars that took to the road to mark the birthday.

Other E Types including several important restorations were on display.

“We wanted to mark the day 60 years ago at the Geneva Motor Show when the public first saw this iconic car and fell in love with it,” said Woodward. “It is the most recognized car in the world and was famously described by Enzo Ferrari as the most beautiful car ever made.

“This marks yet another milestone in the history of this famous marque and it seemed fitting that we mark[ed] the birthday in style”.

Don’t miss the special display of E-Types to be featured at the Vancouver ABFM in fall 2021, subject to the relaxation of COVID restrictions. Check westerndriver.com in June for more information.