By westernadmin on March 8, 2021 in Alfa Romeo, Motorsport, Racing 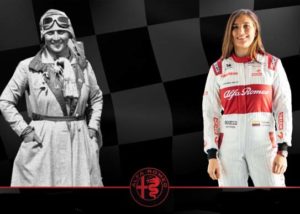 Alfa Romeo is a brand with a long history in racing that dates back to 1910 and extends to Formula One today. Throughout these decades, many Alfa Romeo drivers have made an indelible mark on the sport.

While these women competed in different eras and came from different countries, they all shared a pioneering spirit and a passion for racing, trailblazing uncharted territories in a challenging sport.

The storied list begins with Baroness Maria Antonietta d’Avanzo, who raced for Alfa Romeo in the early 1900s, and spans to Tatiana Calderon, who in 2018 was named a test driver for the Alfa Romeo Racing ORLEN Formula One team.

Chronicled below are some of the key female race drivers in the brand’s illustrious history:

Tatiana Calderon: Born in 1993 in Bogota, Colombia, Calderon took her first step in motorsports in 2005, winning a national championship in the Easy Kart Pre-Junior series. Just three years later, she would become the first woman to win the JICA class of the Stars of Karting Championship East Division in the United States.

While Calderon is the latest example, the journey began more than 100 years ago, when Maria Antonietta d’Avanzo took the wheel of an Alfa race car.

Maria Antonietta d’Avanzo: Shortly after World War I, Baroness Maria Antonietta d’Avanzo debuted with Alfa Romeo. A pioneer of Italian motorsports, an aviator and a journalist, d’Avanzo won third place with the Alfa Romeo 20-30 ES on the Brescia circuit in 1921 and proved her worth in many competitions as a formidable opponent for the best drivers of the time, including a young Enzo Ferrari. Baroness d’Avanzo raced until the 1940s in a variety of vehicles and races, in every corner of the planet.

Odette Siko: In the 1930s, Alfa Romeo asserted itself among the main protagonists of motorsports. This was the merit of extraordinary vehicles, but also of drivers who became part of the legend: these are the years of Nuvolari, Varzi, Caracciola and Sommer. The latter won the 24 Hour of Le Mans race in 1932 behind the wheel of an Alfa Romeo 8C 2300, but the Alfa Romeo 6C 1750 SS of the fascinating Odette Siko finished fourth overall and won the 2.0-liter category. A young Parisian, Siko quickly became a star with her racing performances, often in the company of another French female racer whose destiny also crossed Alfa Romeo’s path several times: Hellè Nice.

Hellè Nice: Born Mariette Hèlène Delangle, she was a model, acrobat and dancer known by the artistic name of Hellè-Nice. Known for her outgoing personality, Nice was a friend of the Rothschilds and the Bugattis. She raced in Europe and America and became one of the first drivers to display the brands of her sponsors on the bodywork of a race car. She participated in the 1933 Italian Grand Prix in Monza with her own 8C 2300 Monza —the tragic race in which Campari, Borzacchini and Czaikowski lost their lives. In 1936, she won the Ladies Cup in Montecarlo and participated in the Sao Paulo Grand Prix in Brazil, where she had a terrible accident.

Anna Maria Peduzzi: The years of Scuderia Ferrari wrote a fundamental chapter in Alfa Romeo’s history. Among the drivers of the “Prancing Horse” was Como-born Anna Maria Peduzzi, the wife of driver Franco Comotti, who was nicknamed the “Moroccan.” After her debut on board her own Alfa Romeo 6C 1500 Super Sport, which she had purchased from Ferrari himself, Peduzzi almost always raced alone and only occasionally with her husband. In 1934, she won the 1500 Class at the Mille Miglia and, in the post-war period, she raced with the Alfa Romeo 1900 Sprint and the Alfa Romeo Giulietta.

Ada Pace (“Sayonara”): In the 1950s, another driver reached outstanding results behind the wheel of several Alfa Romeos: Turin-born Ada Pace. Throughout her decade-long career, Pace won 11 national speed races, six in the Tourism category and five in the Sports category. Almost always enrolled in the races with her pseudonym “Sayonara,” she reached her main successes with the Alfa Romeo Giulietta Sprint Veloce and the Alfa Romeo Giulietta SZ, with which she even won the Trieste-Opicina race in 1958.

Christine Beckers and Liane Engeman: The 1960s were the years of the Alfa Romeo Giulia Sprint GTA. Its results, victories and importance in Alfa Romeo’s history are well known. Less known, on the other hand, are the events of the (supercharged) Alfa Romeo GTA-SA. Prepared in 10 units for Group 5, the GTA-SA was equipped with two hydraulically operated centrifugal compressors that boosted output to 220 horsepower for a top speed of 149 mph (240 km/h). It reached peak performance, but as historical test driver from Autodelta Teodoro Zeccoli explained: “an unpredictable boost of power would kick in suddenly without notice, making the SA an unpredictable vehicle, hard to govern in curves or maneuvering situations.”

Not only was Beckers able to govern the ill-tempered vehicle better than anyone else, but this young Belgian driver won in Houyet in 1968 and achieved excellent results the following year as well: in Condroz, at the “Tre Ponti,” in Herbeumont and in Zandvoort. Beckers, however, was not the only driver to distinguish herself in the GTA. With the Alfa Romeo 1300 Junior of Toine Hezemans’ team, the fast Dutch driver Liane Engeman, who was later chosen by Alfa Romeo as a model, reached distinction.

Susanna “Susy” Raganelli: Possibly the only woman to have won a world championship on four wheels was Roman-born Susanna “Susy” Raganelli, who in 1966 won the 100cc Kart World Championship, defeating Leif Engstrom and the great Ronnie Peterson. Raganelli forever linked her name to Alfa Romeo when she ended her career behind the wheel of an Alfa Romeo GTA, but she was also the first Italian buyer of one of just 12 units produced of the legendary 1967 Alfa Romeo 33 Stradale.

Maria Grazia Lombardi and Anna Cambiaghi: After Maria Teresa de Filippis in the 1950s, the second Italian woman to drive in a Formula One race—in as many as 13 Grands Prix—was Maria Grazia “Lella” Lombardi. Between 1982 and 1984, she participated in the European Tourism Championship with the Alfa Romeo GTV6 2.5 together with Anna Cambiaghi, Giancarlo Naddeo, Giorgio Francia and Rinaldo Drovandi, and contributed to bringing home multiple titles.

Tamara Vidali: When the newly born Alfa Corse department once again launched Alfa Romeo’s racing activities, the era of Tamara Vidali began: a woman racer who won the Italian Tourism Championship in 1992 (Group N) behind the wheel of an Alfa Romeo 33 1.7 Quadrifoglio Verde.