By westernadmin on March 8, 2021 in Aston Martin, Motorsport, Racing 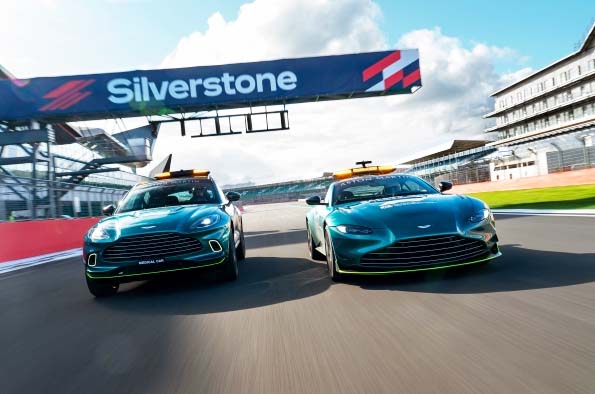 When Aston Martin makes its return to the FIA Formula One World Championship at the end of March 2021, it will be with more than two grand prix contenders on the Formula 1 Gulf Air Bahrain Grand Prix 2021 grid.

For the first time in the history of the sport, the Official Safety and Medical cars of Formula 1 will also bear the famous wings of the British luxury brand.

A specially equipped version of the Aston Martin Vantage has been developed for the critical role of intervening and controlling the pace of an event involving the fastest racing cars in the world.

Engineered by an experienced team at Aston Martin’s Headquarters in Gaydon, the car benefits from significant chassis and aerodynamic improvements.  With only a few additional modifications to make it FIA compliant, the new safety car is the pinnacle of Vantage performance.

Aston Martin DBX, the brand’s critically acclaimed first SUV, will also take on the role of an Official Medical Car of Formula 1, showcasing its own power and handling prowess as it launches into action to support in the event of an emergency.

Aston Martin Vantage – An Official Safety Car of Formula 1
Piloted by FIA’s appointed driver, Bernd Mayländer (DE) who has been at the helm of the F1 safety car for more than 20 years, the Aston Martin will remain on standby in the pit lane throughout the race.

When deployed by Race Control in the event of bad weather or an accident, the former race driver and co-driver, Richard Darker (UK) will take to the track at the head of the field to safely control the pace of the pack, neutralizing the event and allowing any incident to be managed safely by the circuit’s officials.

Aston Martin is known worldwide for its high-profile successes in sports car racing, most recently in 2020’s multi-class victory at the 24 Hours of Le Mans that contributed to becoming FIA GT World Endurance Manufacturers’ Champions.  Engineering developments derived from these successes have aided the systems that feature in the F1 safety car.

The unique requirements of the safety car mean the vehicle must be capable of going from top speeds, back to idling in the pit lane without so much as a cool-down lap, so a reliable and robust thermal management system is a key element to its performance.  Having already developed a cooling system that proved effective in extreme conditions and temperatures on the multiple championship-winning Vantage GT4 race car, Aston Martin transferred this technology into the safety car, along with the addition of extra vents in the bonnet to support further cooling.

“Formula 1 fans around the world are delighted to see the return of Aston Martin to the track, as am I,” said Safety Car Driver, Bernd Mayländer.  “The Official Safety Car of F1 is a beautiful, capable car that signifies an exciting new era for Aston Martin.”