By westernadmin on October 16, 2020 in Collector Hobby

The Fédération Internationale des Véhicules Anciens (FIVA) is conducting a world-wide historic vehicle survey. FIVA’s Legislation Commission is tasked to ensure that the development of national and international legislation does not create an adverse impact to owners of historic vehicles and the use of these on public roads without inappropriate restrictions. 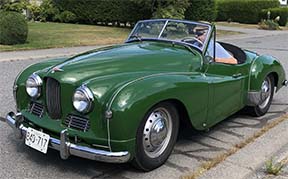 1952 Jowett Jupiter. See this vehicle for sale in the Classified section.

At present, FIVA federates member organizations in 71 countries throughout the world, which in turn represent many millions of historic vehicle enthusiasts.

FIVA’s primary objective is to encourage the safe use of self-propelled, mechanical vehicles, more than 30 years old, on the roads for the benefit of both their owners, dedicated enthusiasts and the general public.

Through its Legislation Commission, FIVA has been assiduous in protecting the continued use of historic vehicles in the face of any adverse legislation. At present, this is largely concentrated on European countries and the European Union, but with ever increasing pressures on motor transport, the organization views the potential threat to historic vehicles to be present everywhere.

To take the survey, click the link below, followed by clicking on the British (for English-speaking countries) flag.