By westernadmin on June 4, 2019 in Motorsport, Pacific Forest Rally, Rallying 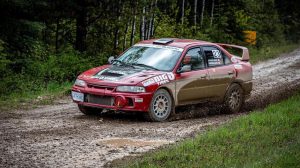 Mark Jennings-Bates, a Western Canada rally champion returned to the sport the weekend of May 25-26 at the Rocky Mountain Rally in Invermere B.C.

After taking a hiatus for several years, his goal, together with his wife Jackie was to finish in a top-10 spot.
This year’s entries came close to 40 teams and with newer vehicles and even more competitive drivers, Jennings-Bates knew he would have his hands full trying to achieve his goal.
For the first time since he started rallying, Jennings-Bates was joined by his wife Jackie, who offered to co-drive.
Co-driving is a complex process of writing shorthand notes and reading them back during the event at a precise pace that allows the driver to attain the fastest possible time through each stage.
“Jackie did amazingly well,” said Jennings-Bates. “Not only did she read the notes almost flawlessly, but her math was correct between stages, which meant that we did not incur any penalties.”
For Jackie, the day was a rapid introduction to rallying. “Mark had promised to warm up to the car and to my style of delivering notes, but very quickly realized that everything seemed to be coming together well so he started to push. The speed and looseness of the driving doesn’t bother me, but I was nervous all day long about making an error in the timing which could cost us a significant penalty.”
As for his goal, Jennings-Bates fell short of finishing in the top 10. In fact, even finishing at all proved elusive to the experienced driver who was sidelined on the second-to-last stage of the first day with a broken tie rod end.
“We were doing really well for a new to us untested car, a brand new co-driver and a rusty driver like me,” said Jennings-Bates. “We were reseeded half way through the day in tenth spot and had been setting some solid top-10 times in the mornings stages. Sadly the rough nature of one of the stages took it’s toll on the car, which ended up with us breaking a tie rod end and being sent over a steep bank.”
This Big O Tire rally team ended up being pleased with their pace and now have work to do to prepare for the Pacific Forest Rally in Merritt, BC in September. The goal will be to solidify their top-10 times and get the car across the finish line.
For more information, visit www.markjenningsbates.com

View all posts by westernadmin →
Finding your Inner Zen on a motorcycle
Volkswagen ID.R sets new electric record at the Nürburgring