By westernadmin on April 30, 2019 in Book Reviews, Motorcycles 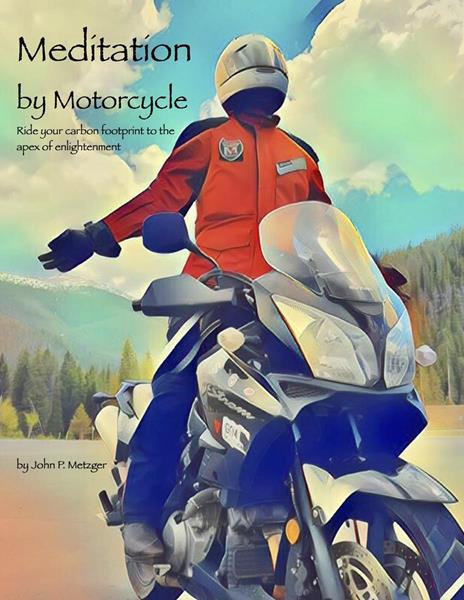 Most people seek inner peace through quiet meditation and reflection, but a new self-help book has a different take.

Meditation by Motorcycle – Ride Your Carbon Footprint to the Apex of Enlightenment shows readers how to achieve enlightenment by riding a motorcycle, something decidedly louder and more dangerous than the traditional yoga class or spiritual retreat.

Assigned a Transcendental Meditation mantra at age 11, author John Metzger started early on the path, but soon discovered that peace and tranquility weren’t for him. Instead, seduced by brute horsepower and mantra by movement, he started riding motorcycles.

His book shares spiritual lessons learned over a lifetime of reverent riding and makes the case that motorcycling is the best way to find elusive Nirvana Moments in a high-pressure world.

Metzger recounts how the Greatest Generation bestowed the luxury of leisure time upon the Baby Boomers. With this gift, they pioneered the “Meditation by Movement Movement,” pursuing every physical path to peace imaginable. From choices ranging from Frisbee and fly-fishing to today’s death sports and social media stunts, Metzger found his Zen on a motorcycle.

“We respect the ancient wisdom,” said Metzger, “but instead seek mindfulness and presence through the cosmic forces of internal combustion, adrenalin and an expanded carbon footprint. The motorcycle enables the perfect relationship between rhythmic movement and internal stillness, drawing out the physical life force like no other.”

With humor and irony, he advocates the ethics of pragmatic technique, safety and courtesy versus a culture fueled by anger, cheap thrills and perpetual adolescence.

Meditation by Motorcycle – Ride Your Carbon Footprint to the Apex of Enlightenment is available on Amazon.com.

After writing Motorcycling Through Midlife in 2013, this is Metzger’s second book.