By westernadmin on June 4, 2019 in Motorsport, Racing, Volkswagen 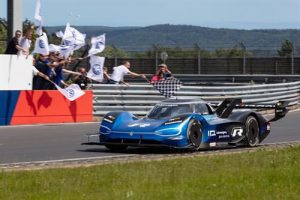 Volkswagen has achieved a milestone in electro-mobility with its ID.R., powered by two electric motors, which lapped Germany’s Nürburgring-Nordschleife in 6:05.336 minutes—faster than any electric vehicle before it.

With an average speed of 204.96 kilometres per hour, the ID.R underlined the impressive performance capabilities of Volkswagen’s electric drive.

To prepare for the Nürburgring Nordschleife challenge, Volkswagen Motorsport gave the ID.R a complete makeover compared to the record outings on Pikes Peak and in Goodwood in just five months.

A 500 kW (680 PS) emission-free race car, the I.D.R is the racing flagship of the future fully electric ID product family from Volkswagen.

BC rally driver returns to the sport after several years off-road
Michelin, GM take the air out of passenger vehicle tires