By westernadmin on January 2, 2018 in Samson Motors

If you’ve dreamed of the day you could go from driving down the road and, like the Jetsons, take to the skies, this is now becoming a reality.

The dynamic vehicle has the looks of an Italian sports car and was featured in the Ultimate Gift Guide from luxury lifestyle magazine, Robb Report, in its December 2017 issue. Entitled “Cutting-Edge Flying Car,” the article highlights the unique features of the Switchblade as a high-performance vehicle on the ground and in the air. 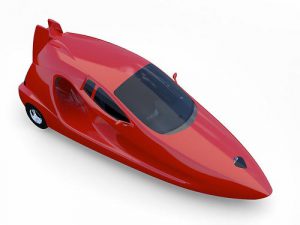 The Switchblade is a three wheel, street legal vehicle that you drive from your garage to a nearby local airport. Once there, the wings swing out and the tail extends in under three minutes. Photo courtesy Samson Motors.

“We started from the beginning with the purpose to design a flying car that provided high performance in both modes,” said Sam Bousfield, CEO of Samson. “Instead of asking ‘how do you make a car fly?’, we asked ‘what layout should a flying/driving vehicle have?’ and designed a vehicle based upon that layout.”

Actual field testing and wind tunnel data may back up their claims. A ground prototype out-performed a Jaguar XK8 in head-to-head acceleration testing. The version slated to go into production next year has the power-to-weight ratio of a 2017 Corvette.

“I think racing is definitely in our future,” said Bousfield, who is also an avid motorcyclist and pilot.

The Switchblade is at odds with many of the more recent Vertical Take-Off and Landing (VTOL) vehicles that have been touted by big-name investors such as Google and Airbus.

“There is a huge difference between the Switchblade and any of the VTOL attempts,” said Bousfield. “It isn’t just that the VTOL is so much slower, or so limited in range. It is the lack of infrastructure in place to be able to use them. You would have to build landing places and parking spots for these types of vehicle at every place you want to visit—shops, restaurants, apartment buildings, office buildings, dentists, doctors, schools—and this is a many decades-long, difficult process.”

The Switchblade combines the use of current road and airport systems to bypass the worst of traffic congestion, while still providing door-to-door travel.

For more information about the Switchblade and to follow its progress to launch, visit: samsonmotorworks.com.